Staffordshire-based Freedom Brewery says it has had its best ever year with an 80 per cent increase year-on-year. 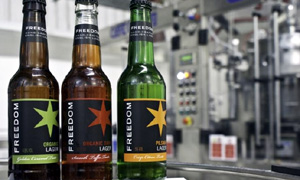 The Abbots Bromley craft brewery, boosted by the release of two new products in 2010, increased production capacity by 60 per cent last year with new fermentation tanks.
The lager is served in top Birmingham pubs including the Wellington, Lord Clifton and the Red Lion.
Susan Mayman, managing director of Freedom Brewery, said: “We were able to secure a number of premium account wins in 2010 including restaurant listings with Jamie Oliver and Gordon Ramsay.
“We’ve had some fantastic feedback from customers too, particularly through our festival partners, and we’re looking forward to building on the success of 2010 and taking the business forward even further.”