Despite new evidence that more people are being treated in hospital for excessive drinking, the overall trend is that we are drinking less as a nation. Why?
It’s difficult to open a newspaper without reading about the alcohol problems that exist in the UK.
Recent headlines include “Binge drinking costs NHS billions”, “Hospitals reel as drink cases soar” and “Alcohol abuse to cost NHS an extra billion”
And this week, figures from Alcohol Concern suggest the number of people being treated in hospital for alcohol misuse has more than doubled in eight years.
But behind these stories is an unexpected truth – Britons have been drinking less and less every year since 2002.
Men and women of all ages are slowly curbing their excesses and drinking in moderation, according to the annual survey from the Office for National Statistics, which covers England, Scotland and Wales.
It suggests that heavy drinking is falling, abstinence is rising, and young people are leading the drive towards healthier drinking.
The decrease among some groups even pre-dates 2002, with men aged 16-24 drinking 26 units a week on average in 1999 and just 15 units a week in 2009, according to the ONS figures.

“There is a received wisdom that we must be drinking more,” says Neil Williams of the British Beer and Pubs Association (BBPA). Its own figures, which are based on sales and not self-reporting, suggest alcohol sales peaked in 2004 and have fallen by 13% since then.
“In reality, we see a fairly deep-rooted decline in alcohol consumption which dates back to 2004. That’s not something you see acknowledged in the media.”
It’s frustrating that the true story is not getting out there, says David Poley, chief executive of the Portman Group, an association of drinks producers in the UK.
“With newspapers, the headline is always the same: ‘Shock rise in binge drinking’. But you look at the figures, and you see alcohol sales are declining.
“It’s a myth that we need to make alcohol more expensive [to stop people drinking]. These trends are being reversed on their own.”
Historically, sales of booze rose and fell with the economy. Recessions in the early 80s and 90s were coupled with a slump in drinking. And the current downturn is having a similar effect. From 2008-2009, alcohol consumption in the UK fell by 6%.
But that decline started long before the credit crunch kicked in – 2004 according to the BBPA and 2002 by the ONS figures. So what happened?
“To a certain extent it’s a mystery,” says Mr Poley. “There may be multiple reasons. But around that time, the UK did see the launch of some major alcohol health warning campaigns.”
In 2004 the Drinkaware logo started appearing on beer advertisements. The labelling of drinks bottles improved to make it clear how many units of alcohol they contain. And the health dangers of heavy drinking were increasingly highlighted by the media.
References to “binge drinking” shot up in 2004, according to Dr James Nicholls of Bath Spa University, who researches the social history of alcohol.
“The media picked up on it around the time that the 2003 Licensing Act was being introduced – when all the talk was of ’24 hour drinking’. And that’s when the whole ‘Binge Britain’ thing kicked off,” he says.
The Daily Mail ran a memorable campaign, featuring images of young women slumped on pavements and park benches. News stories were peppered with health warnings from groups like Alcohol Concern, Drinkaware and the Royal College of Physicians.
“They were very successful at making the health impacts of alcohol a news story,” says Mr Nicholls.

In reality, 24-hour drinking never took off. The average pub only opened 24 minutes longer after 11pm last orders was abolished, says Nicholls. But it didn’t matter – the headlines had already been written. A new tone had been set for alcohol reporting. The message was that Britain was out of control.

The negative publicity not only led people to moderate their behaviour, it also created a new kind of social stigma around being drunk. The ONS survey notes that people may now be “less inclined to admit to how much they have been drinking”.
Boozing was no longer such a badge of honour. And attitudes in the workplace began to change too, says Graham Page, an alcohol industry analyst.
“These days most employers are anti-drink. The six o’clock swill has gone in most places, apart from London,” he says.

Cheap booze
Meanwhile, consumer forces were also at work to change our drinking habits throughout the last decade. Pubs were closing down, duty on beer was rising, and sales of cheap supermarket wine were rocketing.
The caricature of a “drinker” has slowly morphed – from lager louts downing pints to girls on the sofa, sipping Pinot Grigio.
It’s hard to quantify how each of these micro-trends in pricing has influenced overall alcohol consumption, says Mr Page, but their net effect is that the price of a drink as a percentage of spending money is cheaper than ever before. 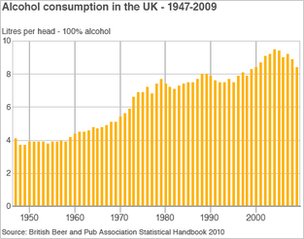 So alcohol is cheaper, but we are drinking less of it – a highly improbable cocktail.
But a look at the longer term picture shows that drinking has been rising steadily since 1947, and levels are still some way above those in the early 1990s.
So is the latest fall a victory for drink awareness campaigning?
Such celebrations would be premature, says Don Shenker, chief executive of Alcohol Concern.
“There are still 10 million people drinking above the government’s recommended level. And 1.6 million dependent drinkers. These are the frequent flyers into hospital, and they are not changing their drinking habits,” he says.
“It is very likely that alcohol consumption will rise again once the economy picks up. So government alcohol policy should ensure alcohol becomes less affordable permanently, not just in an economic downturn.”
The health warnings are here to stay – and rightly so, as hospital admissions from alcohol continue to rise.
It will be a long time before any recent moves towards healthier drinking will be felt in NHS wards.