Sapporo Holdings Ltd., the Japanese brewer seeking to expand in North America, plans to spend as much as 125 billion yen ($1.5 billion) on acquisitions and partnerships over a four-year period. 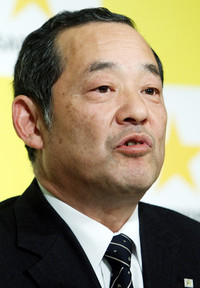 The Yebisu and Sleeman maker aims to expand in North America, Southeast Asia and Japan, where it can build on existing businesses, incoming President Tsutomu Kamijo said in an interview in Tokyo. “More and more wealthy people are emerging in Southeast Asia,” he said. “There is no doubt that Vietnam will expand.”
Sapporo, which plans to spend the amount between 2012 and 2016, is among Japanese brewers turning to overseas markets as a shrinking population dims domestic prospects. The 134-year-old company agreed this month to raise its stake in Pokka Corp. to increase sales of non-alcoholic beverages and reduce reliance on alcoholic drinks, which generate almost 80 percent of revenue.
“Japanese companies should plant seeds overseas to develop growth drivers while they can still generate cash in their home market,” said Kenichiro Katahira, an analyst at Tokyo-based Rating & Investment Information Inc. “Sapporo’s soft-drink business may become another pillar for earnings with the Pokka partnership.”

Vietnam, Canada
Sapporo, whose soft-drink division accounts for less than 10 percent of sales, rose 1.1 percent to 382 yen on Feb. 18 and has gained 3.8 percent this year, lagging behind the 8.3 percent climb of the broader Topix index. The stock slid in Tokyo trading in each of the past three years.
Japan’s fourth-largest brewer by volume “will consider all acquisitions that can increase our profit,” said Kamijo at Sapporo’s head office, without elaborating.
The company plans to open a brewery in Vietnam this year and is considering boosting production capacity at its Sleeman Breweries Ltd. unit in Canada, Kamijo, 57, said in the interview on Feb. 16. Sapporo is still seeking to buy a premium beer brand in the U.S., he said, after first announcing that plan in July.
“It’s sort of different from the situation in the Vietnam, but we can’t ignore the fact that the U.S. population is increasing by 3 million people every year,” said Kamijo, who is Sapporo’s managing director and will be promoted on March 30.
Sapporo will pay 21.3 billion yen to companies including Meiji Holdings Co. and Advantage Partners LLP to increase its Pokka stake fourfold to 85.5 percent, and will merge its operations in April 2012, the brewer said Feb. 10.

Deep-Fried Pork
Pokka sells Aromax canned coffee and flavored tea drinks in Asian markets including Singapore and also runs the Tonkichi chain of deep-fried pork-cutlet restaurants in the city.
“Pokka will open up our opportunities in Southeast Asia as we can also offer soft drinks and not just beer,” Kamijo said.
Sapporo aims to improve the companies’ operations in Japan through joint product development, new restaurant formats as well as cutting production and distribution costs, he said.
The company that sells Black Label beer and Ocean Spray cranberry drinks in Japan set aside 65 billion yen for the two years ending December 2011 to fund its growth strategy, including buying rivals, it said in February 2010.
The brewer forecasts sales to grow 24 percent to 482 billion yen this year. It estimated net income to drop 44 percent to 6 billion yen after a one-time gain of 16.6 billion yen last year.

Rivals’ Acquisitions
Sapporo targets net income of 8 billion yen and revenue of 519.5 billion yen next year. The figures exclude amortization of 1.4 billion yen for the Pokka stake acquisition, the company said Feb. 10.
Japan’s population has fallen since 2006 and may decline to about 125.2 million by 2014, according to data compiled by Bloomberg.
Asahi Breweries Ltd. said Feb. 8 that it may spend 400 billion yen on acquisitions by 2012 to spur overseas sales. Asahi last year agreed to pay A$364 million ($368 million) for Australian soft-drink maker P&N Beverages, and Kirin paid S$1.34 billion ($1.1 billion) for Temasek Holdings Pte.’s 14.7 percent holding in Fraser & Neave Ltd., the owner of Tiger Beer.
Sapporo trails Asahi, Kirin Holdings Co. and Suntory Holdings Ltd. by domestic sales volume for Japanese beermakers.
Sapporo had a 0.4 percent share in the North American beer market last year, helped by a 4.7 percent share in Canada with its Sleeman unit, according to Euromonitor International.