The Brewers Association, the trade association representing the majority of U.S. brewing companies, today released 2010 data on the U.S. craft brewing industry. Small and independent craft brewers1 saw volume2 increase 11 percent and retail sales dollars increase 12 percent over 2009, representing a growth of over 1 million barrels (31 gallons per U.S. barrel), equal to more than 14 million new craft cases.
“Beer lovers increased their appreciation for American craft brewers and their beers in 2010,” said Paul Gatza, director, Brewers Association. “Craft brewers’ stories resonate with Americans who are choosing small, independent companies making delicious beers in more than 100 different styles.”
The Association also reported a growth in the number of U.S. breweries, with eight percent more breweries than the previous year. In 2010, there were 1,759 operating breweries. Craft brewers produced 9,951,956 barrels, up from an adjusted3 8,934,446 barrels in 2009.
“Prohibition caused a dramatic decline in the number of breweries in the United States, but the number of breweries is now at an all-time high,” added Gatza. “With well over 100 new brewery openings in 2010, plus 618 breweries in planning stages, all signs point to continued growth for the industry.”
In 2010, craft brewers represented 4.9 percent of volume and 7.6 percent of retail dollars of the total U.S. beer category. The Brewers Association estimates the actual dollar sales figure from craft brewers in 2010 was $7.6 billion, up from $7 billion in 2009.
Overall, the U.S. beer industry represented an estimated retail dollar value of $101 billion. U.S. beer sales were down approximately one percent, or 2 million barrels, in 2010 compared to being down 2.2 percent in 2009. Total beer industry barrels dropped to 203.6 million, down from 205.7 million barrels in 2009. Imports were up five percent in 2010, compared to being down 9.8 percent in 2009. (Note: the Brewers Association does not count flavored malt beverages as beer.)
Gatza added, “We also found that three percent of craft brewer barrels, by volume, are distributed in cans, confirming a growing trend.”
A more extensive analysis will be released on March 24 during the Craft Brewers Conference in San Francisco. The Association’s full 2010 industry analysis, which shows regional trends and sales by individual brewery, will be published in the May/June 2011 issue of The New Brewer. 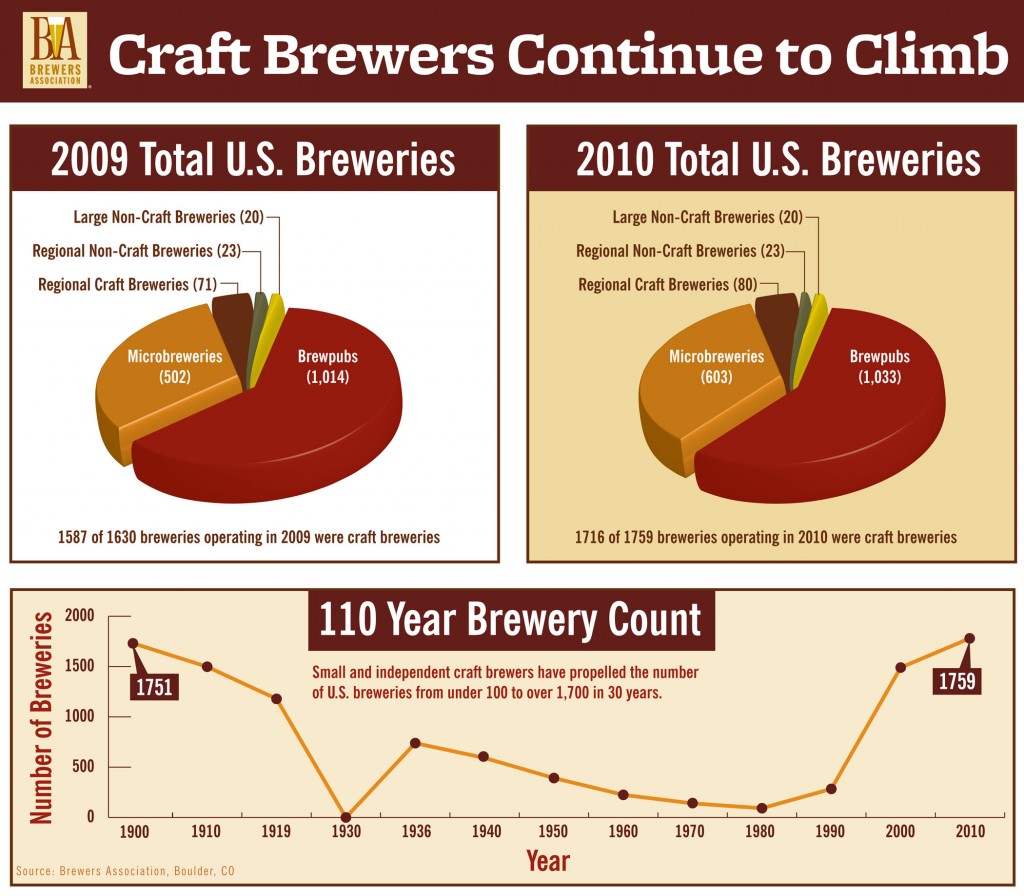 1 The definition of a craft brewer as stated by the Brewers Association: An American craft brewer is small, independent, and traditional. Small: Annual production of beer less than 6 million barrels. Beer production is attributed to a brewer according to the rules of alternating proprietorships. Flavored malt beverages are not considered beer for purposes of this definition. Independent: Less than 25 percent of the craft brewery is owned or controlled (or equivalent economic interest) by an alcoholic beverage industry member who is not themselves a craft brewer. Traditional: A brewer who has either an all malt flagship (the beer which represents the greatest volume among that brewers brands) or has at least 50 percent of its volume in either all malt beers or in beers which use adjuncts to enhance rather than lighten flavor.
2 Volume by craft brewers represent total taxable production.
3 Previous year’s total adjusted due to increased 2009 data points received.