When possible, Stella Artois should be served in its signature chalice glass, which showcases its rich, golden colour while releasing the beer’s flavour and aroma. The new Stella Artois Chalice Can is inspired by the iconic Stella Artois chalice glass, and the secondary packaging for can packs has also been updated to complement the new can design. 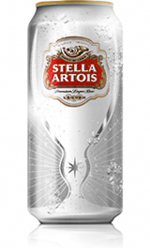 The sleek new can features the chalice glass silhouette against a silver coloured background, which, together with complementary secondary packaging is designed to enhance on-shelf appeal and reinforce the brand’s heritage and quality cues as embodied by the iconic Stella Artois chalice glass.

James Watson, Marketing Director, Stella Artois, Western Europe said: “Our fresh new packaging has been shown to increase consumer appeal above and beyond our competitors, while also communicating Stella Artois’ heritage and quality. The new Stella Artois Chalice Can design reflects our determination to raise the bar when it comes to quality and sophistication – the key values that form the foundation of the Stella Artois brand.”

Anheuser-Busch InBev is the leading global brewer and one of the world’s top five consumer products companies. For 2009. Anheuser-Busch InBev generated revenues of 36.8 billion USD. With a dream to be The Best Beer Company in a Better World, the company has a strong, balanced brand portfolio. With four of the top ten selling beers in the world, Anheuser-Busch InBev holds the No. 1 or No. 2 position in 19 key markets. It has a key presence in both developed and developing markets. Headquartered in Leuven, Belgium, Anheuser-Busch InBev leverages the collective strength of approximately 116,000 people based in operations in 23 countries across the world. The company works through six operational Zones; North America, Latin America North, Latin America South, Western Europe, Central & Eastern Europe, and Asia Pacific, allowing our consumers around the world to enjoy our beers.

SUN InBev – the second largest (according to the volumes of sales) brewing company in Russia. It was founded in 1999 and operates now as a Russian unit of leading brewing company in the world “Anheuser-Busch InBev”. Company has a network of modern breweries in ten Russian Cities: Klin, Volzhsky, Omsk, Perm, Ivanovo, Saransk, Kursk, Novocheboksarsk, Angarsk and St. Petersburg. The main brands of beer produced by the Company in Russia are – Stella Artois, Beck’s, Brahma, Staropramen, Hoegaarden, Sibirskaya Korona, Klinskoye, Tolstiak and BagBier.