2015 will go down in the history of NürnbergMesse as the odd financial year with the highest turnover: the trade fairs, exhibitions and congresses held at the home location Nuremberg and worldwide mean that we can expect total turnover of around 195 million Euro. On the basis of this positive corporate development, Dr. Roland Fleck and Peter Ottmann, the CEOs of NürnbergMesse Group, are announcing another “all-time high” in turnover for 2016 with a forecast “250 million Euro plus X”: “Our event formats are developing splendidly, the internationalization of NürnbergMesse is continuing and the investments in the exhibition centre Nuremberg have reached a really major milestone with the construction of the new Hall 3C!” 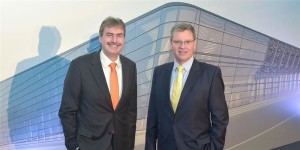 The announced “hot autumn” has thus become reality: the first staging of Beviale Moscow, a growing network of international representatives, record participation figures at trade fairs such as FachPack, BrauBeviale and it-sa along with the decision to build the new Hall 3C. Overall, NürnbergMesse has thus set the course for the next phase of its corporate development. For 2016, this highly symbolic mark will be exceeded for the first time with turnover of over 250 million Euro thus leading to expectations of a new record year in the company’s history, according to the two NürnbergMesse CEOs.

Within the framework of the Annual Press Conference, Dr. Roland Fleck and Peter Ottmann also presented the results of the current ifo Study (Institut für Wirtschaftsforschung / Institute for Economic Research). Interesting facts and figures have been established by the institute headed by Professor Dr. Sinn: according to these findings, the events held, along with the continual investments made in the exhibition centre Nuremberg, guarantee 15,000 full-time jobs every year – incidentally two-thirds of them in the Metropolitan region.

In addition, due to the expenditure of visitors and exhibitors at the exhibition location Nuremberg, purchasing power effects of 1.65 billion Euro are generated each year in Germany. Those primarily benefiting from this are sectors such as the hotel and catering industry, retail trade and service-providers in the exhibition construction sector, airports or logistics.

Dr. Roland Fleck and Peter Ottmann are sure: “If we include in the model the fact that almost one-quarter of expenditure is effected abroad, then we would indeed arrive at purchasing power effects of over 2 billion Euro.” The tax authorities are also directly benefiting from the events held at the exhibition centre Nuremberg – according to the ifo Study, this has been verified at over 300 million Euro each year, of this sum over 100 million Euro alone goes to the Free State of Bavaria. For the two NürnbergMesse CEOs one thing is thus certain: “The events in our portfolio ensure that the NürnbergMesse economic engine is buzzing – in the Metropolitan region, but also in Bavaria, Germany and beyond.”

Construction of the new Hall 3C

In addition, just a few days ago, the decision taken to build a new Hall 3C was also presented: now for the second time, within the framework of the consistent continuation of the south extension of the exhibition centre, a new exhibition hall is to be created characterized by the personal style of star architect Zaha Hadid, offering the highest quality and energy standards and almost 10,000 m² of gross exhibition space. In the medium term this investment will enable the successive modernization of the exhibition centre, while at the same time involving no loss of exhibition space.

The completion of Hall 3C is planned for 2018. Based on the current planning, the investment volume, including the necessary infrastructure and taxes, will amount to around 70 million Euro, according to Dr. Roland Fleck. As a result, the triple combination of dynamic event growth, clear internationalization strategy and increased investments in the exhibition centre Nuremberg, will create the basis of success enabling the company to continue as a successful exhibition company in future, according to both NürnbergMesse CEOs, who are in absolute agreement.
About the NürnbergMesse Group

NürnbergMesse NürnbergMesse is one of the 15 largest exhibition companies in the world. The portfolio covers some 120 national and international exhibitions and congresses and approx. 40 sponsored company pavilions at the Nuremberg location and worldwide. Every year, around 30,000 exhibitors (international share: 41%) and up to 1.4 million visitors (international share of trade visitors: 24%) participate in the own, partner and guest events of the NürnbergMesse Group, which is present with subsidiaries in China, North America, Brazil, Italy and India. The group also has a network of about 50 representatives operating in over 100 countries.