Ask any Muslim whether drinking beer is haram (prohibited), and their answer will be an obvious ‘yes’, due to the high alcohol content in the beverage that is intoxicating. The same goes with all Muslims living in Malaysia, ask them the same question, and they too are well aware that the substance is haram.

However, ask any Muslim whether drinking non-alcoholic beverages like Bintang Zero beer (Indonesia), Barbican (UAE), Istak (Iran) and Bavaria (Netherlands) which claim to have zero per cent alcohol content, is considered haram, many are not able to give a definite answer. And what about local favourite treat, ‘tapai’ (fermented rice)? Tapai contains at least seven per cent alcohol, and some can even contain up to 10 per cent alcohol.

Alcohol and liquor are two different things. While it is true that liquor has alcohol content, not all alcoholic drinks are liquor. Alcohol in its nature is not unclean and can be used in perfumes or preservatives. Whereas, liquor is highly concentrated in alcohol which makes it highly intoxicating. 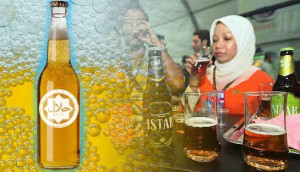 If alcohol is considered haram, what about alcohol that sometimes exists naturally in many natural and organic food items, like grapes? Not all food items with alcohol are considered haram as they are not alcoholic beverages like liquor or beer.

Many Muslims are often confused as to what extent is alcohol deemed haram in Islam, and how much percentage of alcohol is actually permitted in food or beverages. But why should Muslims be so concerned over alcohol, when none of the verses in the Quran and the hadith prohibits alcohol?

The only warning involves drinking ‘khamr’. Khamr is a word that applies to any kind of drink that causes intoxication, and based on this fact, it is clear that the restrictions are based on the nature of an intoxicant, and not its ingredients.

According to the Prophet Muhammad (PBUH) in the hadith narrated by Ahmad and Abu Dawood from Abdullah ibn Umar, “Every intoxicant is khamr and every khamr is haram.”

The majority of scholars also define khamr as anything that is intoxicating, regardless consuming a little, or a lot. So, just how many types of khamr are there?

There are two types, one containing alcohol, and one without alcohol. There are many examples of khamr that contain alcohol, from various beers, and liquor such as wine, whiskey, brandy, vodka and so forth.

Whereas marijuana, morphine, opium, marijuana, cocaine, ecstasy, methamphetamine and various drugs that cause intoxication or unconsciousness are examples of khamr that do not contain alcohol.

As for tapai which definitely contains alcohol, according to the Fatwa Committee of the National Fatwa Council for Islamic Religious Affairs Malaysia in their seventh meet on April 11-12, 1984, if the tapai produced is not intoxicating when consumed, then it is ‘halal’(permissible).

Nevertheless, if the tapai is fermented for too long and can cause intoxication, it would be considered haram. The Indonesian Ulema Council (MUI) has also issued a fatwa that eating tapai is considered halal, and up until today, there has been no reports that the treat is intoxicating.

1. Every wine contains alcohol. However not all alcohol are wine. Alcohol that is extracted from the winemaking process is ruled as haram and impure.

2. However, alcohol that is not produced through the winemaking process is not ruled as impure, but is prohibited from being consumed in its original form as it is a poison and can kill.

3. Light beverages processed/made not for the purpose of producing wine and containing alcohol below the level of 1% v/v are permissible to be consumed.

5. Food or beverages containing natural alcohol such as fruits, nuts, grains or their juices, or alcohol that incidentally forms during the production process of certain food or beverages is not considered impure and is permissible to be consumed.

6. Food or drinks with flavouring or colouring that contains alcohol for stabilisation purposes are permissible to be consumed provided that the alcohol is not produced from the winemaking process, the quantity of such alcohol in the final product is not intoxicating and the alcohol level does not exceed 0.5%.

7. Medicines and perfumes containing alcohol as a solvent agent are not impure and are permissible provided such alcohol is not extracted from the winemaking process.

Prior to these discussions, malted beverage Barbican, from the UAE, was certified halal by the Islamic Food Research Centre (IFRC) – Malaysia and Asia Region whose headquarters is in Petaling Jaya, Selangor, on February 17, 2011 (Certification No IFRC/P/LA/11/0026). IFRC also issued a certificate, certifying that halal ingredients were used in Barbican and its manufacturing process did not make it alcoholic.

On July 26, 2011, National Fatwa Council chairman, Prof. Tan Sri Dr. Abdul Shukor Husin, made it clear that the Barbican malted beverage was not processed to make it alcoholic, and contains low alcohol content which is not intoxicating. He however advised the manufacturer and distributor to better label the product to not cast any doubt, especially for the Muslim consumers.

In January 2015, MUI announced a number of food and beverage products that received the halal certification. In its announcement, Bintang Zero beer, which is manufactured in Indonesia, was declared haram.

Despite manufactures previously claiming the beverage contains zero per cent alcohol, the results of a study conducted by the Assessment Institute for Foods, Drugs And Cosmetics, found that there were alcoholic contents that made it haram.

The beverage manufactured by PT Multibintang Indonesia, was made to replicate the taste of beer without using the process of fermentation. However, it is found that its imitation process was a way of producing illegal liquor, subsequently influencing Muslims to indulge in something that is prohibited in their religion.

The fourth fatwa by MUI in 2003, stated “It is prohibited to consume food/beverages that give rise to taste/aroma, or animals that are prohibited”. This was a precautionary measure to prevent Muslims from indulging something prohibited, and in his presentation, the Chairman of the MUI Fatwa Commission, KH Ma’ruf Amin, stated, “if something is pointing in the direction of haram, it is the way to haram.”

Malted beverages marketed as halal beer is dubious. This misrepresentation is not in accordance with Islamic law, and only leads to negative social, and cultural implications. So, are we to expect halal pork or halal gambling in future? This would only cause more confusion and make way for more slanders against Islam. In fact, malted beverages such as Barbican, Istak and Bavaria have casted doubts as its packaging does resemble actual beer bottles.

Isn’t it unfair to promote a product with beer in the name, no matter if its non-alcoholic? And what more when it is facilitated by Muslims? In a time where too many slanders have been made against Islam, Muslims should address any misunderstandings, instead of casting more doubt.