Myanmar Brewery has upped its game, as international competitors Heineken and Carlsberg launch their beers into the market.

Myanmar’s largest brewery has an 80 percent market share – 65pc or 70pc, if smuggled and imported brands are added into the mix – said Hiroshi Fujikawa, the company’s new CEO.

Nevertheless, he hopes to double current sales figures for all of its brands in five years, he said, at a ceremony to launch the company’s new logo in Yangon yesterday.

“To do that we will have to rely not just on the growth of the market, but on innovation and new products to attract new consumers to drink more beer.”

The beer market experienced doubled-digit growth in 2015, driven by foreign investment, he said.

The company claimed 2014 sales of K254 billion (US$198 million) of products including Myanmar Beer, Andaman Gold and Myanmar Double Strong, according to a statement earlier this year from its majority owner, Japanese drinks company Kirin Holdings.

Kirin bought a 55pc share in the company in August from Singapore-listed Fraser and Neave for US$560 million, after a drawn-out ownership dispute between F&N and minority shareholder military-linked Myanma Economic Holdings Limited (MEHL). 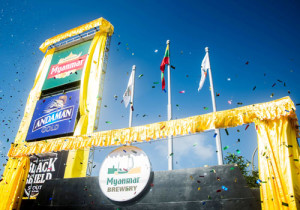 In the mix, Myanmar Brewery lost the rights to produce two of its most well-loved brands – ABC stout and Tiger beer in Myanmar – which were held by F&N.

In the past, Dutch beer-maker Heineken held licences to produce both brands, and has now taken these back.

This was a blow, said Mr Fujikawa. “It is always sad to say goodbye to something you have become familiar with, but it’s also important to innovate and to take on challenges,” he said, declining to discuss specific details of the contract.

“There were no licence fees. Those brands belonged to Heineken – it was their right to terminate the contract, so we had to give it up.”

He said Myanmar Brewery had not sold ABC and Tiger since August 20. However, on September 9, it launched a new product – the 8.1pc strength Black Shield.

Myanmar Brewery had hundreds of customers that drank ABC and Tiger, said Mr Fujikawa, adding that he hoped they would take up drinking Black Shield instead.

Tetsuhiko Sato, deputy managing director of Myanmar Brewery, said customers have responded well to Black Shield. The taste is stronger than ABC because the drink is more alcoholic, he said. “Myanmar drinkers often mix lager with stout and expect a strong taste.”

The company also plans to introduce a competitor to the Tiger brand.

“I look forward to it – hopefully it will launch early next year. I think we can replace Tiger with our new product, and make a profit as well,” said Mr Fujikawa.

Managing director of APB Alliance Brewery, which launched “Made in Myanmar” Heineken beer on October 9, said its first batches of ABC and Tiger will be ready to drink by the end of the year.

“As soon as they’re ready, we’ll start distributing. There will be some small changes, but not to the taste.”

APB plans to make some adjustments to its marketing and distribution strategy, including potential promotions, he said. “We are still determining the volumes for each brand. As the brands have just been handed to us, we do not have firm numbers yet.”

Myanmar Brewery’s Mr Fujikawa said competitors Heineken and Carlsberg have a similar strategy, in terms of launching a local brand as well as a premium beer.

Kirin has a partnership with Heineken in Japan, so is familiar with its approach.

“They have deep pockets and are global leaders, so we have to look carefully at what they are doing,” he said.

“At the same time, I hope the competition will remain fair, and that we can all enjoy healthy growth.”

He hopes to remain one step ahead of rivals and maintain Myanmar Brewery’s dominance in terms of market share. “Myanmar people are proud of Myanmar Beer, and other breweries will have to base the taste of their beers on this. Local beer is the base beer – that’s common sense across the world.”

Myanmar Beer also dominates beer stations across the country – the main place for consumption, said Mr Tetsuhiko. The brewery has also introduced a new keg line, which will allow it to produce 20pc to 30pc more keg beer than before.

“Customers in beer stations love our brands – both Andaman and Myanmar beer.”