Competition is heating up between China’s top two breweries. And with the country coming off its first-ever year of declining beer sales, the battle to win more customers has an air of urgency to it.

Industry leader China Resources Beer (Holdings), whose strategy has been to concentrate on the domestic market and sell large volumes of low-price brews, is expanding its nationwide sales network and putting more effort into promoting higher-end offerings.

Second-ranked Tsingtao Brewery, which has focused on midrange products and cultivating overseas markets, is responding to the toughening business climate by developing new products to diversify its lineup.

China’s top breweries and their foreign rivals have been locked in a price war since September. CR Beer, Tsingtao and Belgium’s Anheuser-Busch InBev, which commands the third-biggest share of China’s beer market, are all competing to undersell each other. Now 20% discounts are common sights in supermarkets across Shanghai. This is noteworthy when considering that beer was cheap to begin with; even high-end 500ml offerings carry suggested retail prices of around 10 yuan ($1.56). 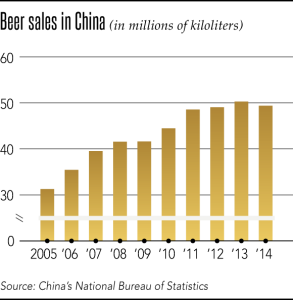 After expanding in lockstep with the economy, China’s beer market surpassed that of the U.S. to become the world’s biggest in 2002. In the process, brewers underwent a dramatic consolidation process. At one point, China had more than 800 players. But the number contracted sharply as major players swallowed up smaller rivals. Today, the top five players control roughly 70% of the market, with CR Beer and Tsingtao commanding shares of 23.2% and 18.4%, respectively.

Beer sales in China totaled 49.39 million kiloliters in 2014, double the U.S. figure. But this was not happy news to the industry, as it translated to a 1.8% drop from a year earlier, marking the first-ever contraction in the country’s beer market.

Another worrying factor was disappointing beer demand this past summer, which left brewers with excess inventories. CR Beer opened hostilities by unloading its inventories at steep discounts.

“Rivals responded by matching CR Beer’s discounts, kicking off a war of attrition in the world’s biggest beer market,” an industry watcher said.

The China Resources group expanded into the beer business in 1993 by purchasing a regional brewery. It has become China’s No. 1 brewer by aggressively pursuing takeovers and making the most of the group’s nationwide network of about 4,800 retailers, which includes a supermarket chain run by China Resources Vanguard. Its annual sales volume exceeds 10 million kiloliters.

Low product prices have driven the company’s growth. A 500ml bottle of its flagship Snow brand beer sells for just 2 yuan. But even the top brewer has not been immune to the effects of the market contraction; CR Beer’s sales for the six months ended June declined 1% on the year.

The company’s response was to concentrate on the brewery business. It transferred its money-losing retail business to parent company China Resources (Holdings) in April.

“We will focus on the beer business and increase our investment in a sustainable manner,” said Hong Jie, chief executive officer of CR Beer. 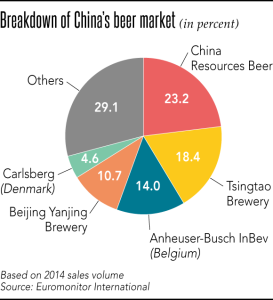 As a first step, the company is looking to shore up its sales and profits by expanding its sales channels, with a focus on regional cities and farming areas, where competition is less fierce. At the same time, the company has begun adding more higher-end offerings.

The latter action is effectively “a declaration of war against Tsingtao Brewery,” an industry insider said.

The No. 2 brewer is also feeling the heat from AB InBev. Although its mainstay Budweiser belongs to the upmarket segment, selling for around 10 yuan, the Belgium-based multinational has managed to win customers away from Tsingtao through active promotional activity in Guangdong Province, Tsingtao’s key market, among other areas.

An alarmed Tsingtao struck a deal with Japan’s Suntory Holdings in October to gain full control of 50-50 ventures in Shanghai and Jiangsu Province established in 2013. This deal gives the Chinese company a solid foundation to work on, as it will lift its share of sales in Shanghai to 50%. That is quite a coup considering the city is China’s biggest beer market.

The company has also stepped up efforts to develop high-value-added beers. Many Chinese beer brands sell products with alcohol contents of only around 3.5%, achieved by diluting the beer with water. Some blame the bland flavors of these beers for the declining sales.

To lure drinkers back, Tsingtao has launched new offerings, including a bitter-tasting black beer, a white beer made from wheat, and a beer for women that is less bitter and has peachy fragrance. The company aims to further hone its product development capability and release more such products. 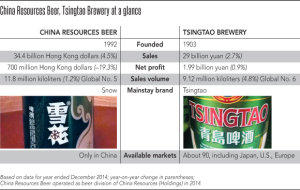 A crucial challenge for both CR Beer and Tsingtao is consolidating the old, inefficient breweries they have accumulated through their many acquisitions. CR Beer owns about 90 breweries, whose overall utilization rate stands at an appalling 50% or so. With Tsingtao also counting nearly 80 breweries to its name, both companies must close some facilities and cut jobs to boost productivity.

A massive deal earlier this month by AB InBev will see the world’s top brewer gobble up its biggest rival, second-ranked U.K. brewer SABMiller. This will likely have repercussions for the Chinese beer industry.