East End Foods, the creator of Himalayan Monkey, has announced the release of a second authentic Indian bottled beer.

Shimla joins Himalayan Monkey – the craft beer designed to pair with spicy foods, which FoodBev first reported on back in June – in being released for general sale this month. 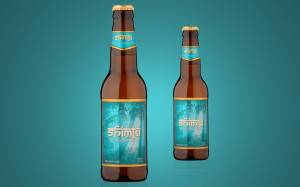 Both beers have been formulated to be robust enough to work perfectly alongside the spices used in Indian and Bangladeshi food, without overpowering their delicate flavours. They have been authentically brewed and bottled in India, making them a popular choice with the growing number drinkers who have a thirst for “craft offerings” from manufacturers who are producing on a smaller scale and to ensure quality and a closer connection to the authenticity of their brands, East End Foods said.

The company’s commercial director, Paul Deep, said: “The UK’s current two best-selling beer brands which strongly imply they are ‘Indian’ are actually brewed in the UK and are mass produced. Hence, we realised there was an opportunity to provide consumers with genuine Indian beer in the UK.

“Like with all East End products, the company painstakingly worked on the quality of the recipes in India, which in total took over a year to get right; we are delighted with the outcome.

“In Himalayan Monkey beer we identified a gap in the market for an authentic Indian beer that is priced and positioned to appeal to a younger, more street-wise lover of ‘all things hot and spicy’ – a movement that continues to grow and reflects a clear preference for spicier foods amongst younger, more adventurous consumers. The Himalayan Monkey branding and label design will really capture the imagination of this market.

“Furthermore, we also realised that there is space in the market for a beer brand which appeals to the more mature consumer of Indian cuisine, especially those who frequent higher-end Indian restaurants, so we developed the Shimla brand.”

“For both beers, there’s a real emphasis on the care with which they’ve been prepared and the authenticity of ingredients we’ve used,” Deep continued. “We think this will be appreciated by an increasing number of consumers as the trend to move away from mass production across the FMCG market continues to pick up pace in the UK”.

“Our initial strategy will be to distribute the beers through the massive network of Indian restaurants which exist throughout the UK… we are confident that the consumer will love this real taste of India.”