When Jin Xin first started selling imported premium beer a decade ago, his bar manager predicted that it would take a month or two just to sell a single case. But within a few years business picked up, and soon customers started frequenting the bar for its India pale ales and other European beers.

Now, one of Mr. Jin’s bars, NBeerPub, tucked away in a laid-back part of Beijing’s old town, buzzes with young Chinese customers ordering imports like Delirium Tremens, Lindemans Framboise and Brewdog Punk IPA. Mr. Jin even sold a bottle of Brewmeister Snake Venom, a high-alcohol barleywine-style beer from Scotland, for about 2,700 renminbi, or more than $420. 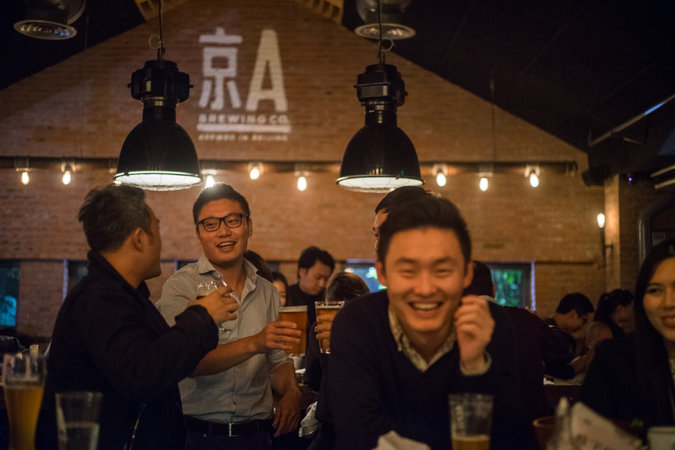 “Slowly, Chinese people have more money in their pocket,” Mr. Jin, 43, said in his apartment, where over 6,000 bottles from more than 60 countries filled the shelves. “After they have money, some want something better in terms of taste as well as lifestyle, especially young people.”

It is the type of opportunity that is at the heart of Anheuser-Busch InBev’s $106 billion deal to buy SABMiller, its rival global brewer. While major markets in Europe and the United States have been sluggish, developing markets like China offer a growing customer base and the potential for a stronger profit.

The Chinese middle class is swelling with young, affluent professionals who are more willing to spend money on brands and who are experienced travelers looking for a taste of other countries back home. And in China, most beer is still considered affordable. So sales have held up relatively well even as wine, the Chinese spirit baijiu and other more expensive liquors have been hit by the country’s anticorruption crackdown and the slowing economy.

“It’s an escape route from maturity in the West,” said Spiros Malandrakis, a senior analyst of alcoholic drinks at the research firm Euromonitor International, referring to the established markets of the United States and Europe.

In China, Anheuser-Busch InBev and SABMiller are betting on premium products.

The two beer behemoths were among the first international entrants into China in the 1990s and initially teamed with local brewers. At the time, domestic breweries produced beer of inconsistent quality, but they were quickly multiplying, and consumption was soaring along with disposable incomes.

SABMiller took a 49 percent stake in a joint venture that makes Snow, which is now China’s best-selling beer brand. Anheuser-Busch InBev has since bought Harbin and Sedrin, two other top domestic brands. Together, the international brewers account for about one-third of the overall beer market in China.

As they pursue a merger, given their dominance, Anheuser-Busch InBev and SABMiller are expected to prune their portfolio in China to keep regulators happy, though it remains unclear where the trimming will be done. Some analysts think they would be able financially to justify the sale of a big domestic brand like Snow, since the market is moving toward premium offerings.

“They might be forced to divest, but it might not be the end of the world for them, because Snow is not necessarily the price point for them,” said Shaun Rein, founder of China Market Research in Shanghai. “Consumers are looking for better quality.”

When the deal was announced, Anheuser-Busch InBev said it would “promptly and proactively” resolve any regulatory issues in China.

The focus follows the shift in the market in recent years. 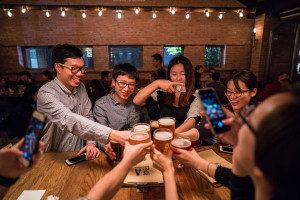 Homegrown craft beers are gaining favor. Beijing is home to about half a dozen microbreweries, and others have popped up in cities across China.

At the Jing-A Brewing Taproom in Beijing, the owners, transplants from Connecticut and Toronto, serve American-inspired beers with local flair, including Worker’s Pale Ale, Airpocalypse Double IPA and Mandarin Wheat.

Ji Chen, a banker, developed a taste for fine beer as a student in Belgium. When he returned to China, Mr. Chen, now 28, started buying imported beer at the supermarket and hanging out at brew pubs.

“I don’t think it’s expensive,” he said, sipping the Flying Fist IPA at Jing-A. “If you go out to drink at a bar, you would have to spend this much for any drink you get. And craft beers here are of good quality.”

The high-end varieties can fatten a company’s bottom line.

More than 30 percent of sales under the Snow brand are in the premium segment, including Snow Draft and Snow Brave the World, according to SABMiller ’s annual report. The brands Anheuser-Busch InBev markets as premium in China, which include Budweiser, Corona, Stella Artois and Hoegaarden, make up nearly a quarter of its sales by volume.

“All of this premiumization and trading up is the biggest revenue driver of our industry,” Jean Jereissati, Anheuser-Busch InBev’s China president, said at an investor seminar in September. “And it is very relevant for our company.”

Anheuser-Busch InBev and SABMiller are digging deep into their cooler of longtime brands in the hope of attracting more discerning customers. In part, they are promoting the provenance of their brands.

When Budweiser Supreme was introduced, the company projected a video detailing the recipe’s origins and ingredients onto a giant bottle in various Chinese cities. Against a striking soundtrack, the company described how the beer had the “rich aroma of wheat malt flavor and aristocratic bearing.”

Lifestyle, too, is major selling point.

Other advertisements featured Budweiser Supreme being poured in a restaurant by a waiter wearing white gloves. In the summer, women in their 20s, wearing dresses with Corona or Budweiser logos and sometimes long white boots, were often seen milling around the bars and chatting with customers in the upscale Sanlitun area of Beijing.

“They put a lot of money into the marketing, the heritage — all those things make consumers pay more for it,” said Jonny Forsyth, a global drinks analyst at Mintel, a research firm. “That’s what’s been missing in China. Younger people are more receptive to it.”

The message is getting through to consumers, who are increasingly willing to pay for beer.

At Heaven Supermarket, a store and bar with a backpacker vibe, Chen Jing, 30, browsed through the imported beer with her boyfriend, both of them clutching beers that cost about 50 renminbi each, or nearly $8. A bottle of Snow from the grocery store next door cost just 1.9 renminbi, or about 30 cents.

Most of the bottles going through the checkout at Heaven are overseas varieties like Hoegaarden, Corona and Budweiser, selling for 15 renminbi. And the store, across the road from a Rolls-Royce and Bentley dealership, is not short of people perusing more expensive beers, which can cost up to 100 renminbi, or about $15.

Ms. Chen started drinking foreign beer after vacationing around China and Southeast Asia. She has taken such a liking to the beer culture that she is planning a holiday in Belgium.

“I would rather be spending money on few quality beers than buying lots of cheap beers and feeling full and headachy,” she said. “It’s more about the lifestyle I choose than simply drinking.”