With the popularity of Quick Service Restaurants (QSR) in India and the demand for fast food on the rise, international chain restaurants like Wendy’s and Carl’s Jr. are introducing more innovative menu options to entice its customers. Recently, the menus at chain restaurants like Dunkin Donuts and McDonald’s saw an increase in high-priced items to potentially cater to the working professionals with high disposable income in the metros.

The King of Beers 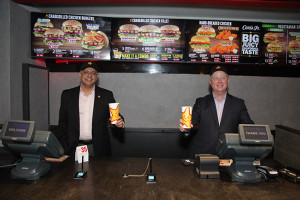 Kingfisher, the leading beer seller in India, partnered with Carl’s Jr. last year to sell their premium beer brands at the Saket Outlet. Speaking at the launch, Sana Chopra, executive director of Carl’s Jr. India, said, “We are excited to introduce beer to our customers at Carl’s Jr. The youth today is looking for a differentiated experience while eating out and what can be better than a beer.” The need to differentiate themselves with other QSR’s like McDonald’s which caters to the public with children-centric offerings was the main reason behind this partnership, said Chopra.

Carl’s Jr. was one the first outlets to offer beer on the menu and the success of the launch has encouraged other players to dive into the casual dining segment. Samir Chopra, Group Chairman, Cybiz Corp, the franchise for Carl’s Jr. said, “The rest of the burger players got a jolt when we introduced beer in our first outlet in India. But since we address an age group of 18-40, we took the decision to bring beer in India having tried it in certain markets in the US and Russia.”

Wendy’s Will Remain A Burger Joint

Wendy’s are also in talks with premium beer and wine brands to introduce alcohol in the menu but has made sure to position itself as a burger place which sells beer, instead of the other way around. Speaking about the initiative, Jasper Reid, Director of Sierra Nevada, franchisee of Wendy’s in India, said, “Bringing in wine and beer is a new initiative that we have taken for the Indian market. We are trying to get licences for Indian brands in this segment and keep it as affordable as possible. At the same time, we are not a bar but a burger joint.”

Since burgers and beer are closely attached at the hip across many countries in Europe and US, the introduction of beer makes a tremendous impact in the revenue generation for these restaurants. The second largest burger brand in the world, Burger King, has yet to enter this market in India but have experimented with it in the US. Raj Varman, CEO of Burger King India, said, “We are not ruling out entering wine and beer since we have Whopper bars in certain places like Miami in the US.’’

Although there are several advantages in introducing beer and wine in the menu, mainly the increase in revenue, there is a distinct doubt as to how these QSRs position themselves as a brand in the marketplace. Fast Food Restaurants like McDonald’s, Burger King, and Wendy’s have continuously invested in changing their brand image from just another fast food place into more of a casual-dining experience. Since the restaurants also cater to a significant number of teenagers and families, there is some doubt regarding how adding items like beer and wine on the menu could impact their brand image.