Including the 2015 figures, the Vietnamese brewery industry achieved an average of seven percent in annual growth between 2011 and 2015, the VBA said. 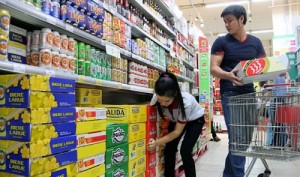 According to the VBA, the total annual capacity of the local beer industry has to this point reached about 4.8 billion liters.

With regard to wine, about 162 industrial wine production plants nationwide produce roughly 70 million liters on a yearly basis, and the production of homemade wine for local consumption is estimated at over 200 million liters per year, according to the VBA.

By the end of last year, Vietnam had had nearly 1,833 beverage production facilities with a combined annual capacity of over five billion liters.

Soft drinks and fruit juices experienced a high growth rate, making up 85 percent of the market share of beverages, while mineral water accounted for about 15 percent.

Vietnam is considered a highly potential market for both local and foreign brewers with an annual capacity of 3.1 billion liters, and a goal of 4-4.25 billion liters by 2020 following a plan set by the VBA.

It is also a market where competition is fierce between local and foreign rivals.

Masan Consumer Holdings, one of the biggest Vietnamese producers of fast-moving consumer goods under Masan Group, last month officially began operating its VND1.6 trillion (US$70.4 million) beer plant in the Mekong Delta province of Hau Giang, one day after entering into a massive deal with a Thai conglomerate.

The strategic cooperation between Masan and Singha Asia Holdings Pte Ltd of Thailand, which will reduce the ownership of Masan Consumer Holdings in Masan Brewery to 66.7 percent, is expected to be completed this month.

The two parties said the agreement will allow Masan and Singha to immediately expand their market from national to regional scales, with a focus on inland ASEAN countries, including Vietnam, Thailand, Myanmar, Cambodia and Laos, which have 250 million consumers in total.

Masan said the deal would help bring the total value of the company to $4.2 billion, up from its current VND56 trillion ($2.46 billion) capitalization on the Ho Chi Minh City Stock Exchange.

A report from the Ministry of Industry and Trade, seen by Reuters last month, revealed that Vietnam’s biggest state-run brewer Sabeco does not wish to sell a major stake to a foreign shareholder.

The report was prepared for a meeting, to which no foreign media were invited, between ministry officials and heads of some state-owned enterprises, including Sabeco, on December 21, Reuters reported.

Vietnam, which consumes three billion liters annually, is currently the third-biggest beer market in Asia, after China and Japan.

In 2015, reports that the government will divest from many local beer firms captured the attention of a large number of foreign firms that do not want to miss the opportunities present in the 90-million-strong Southeast Asian country.

Among them, Thai Beverage wanted to buy a 53 percent stake in Sabeco with several billion U.S. dollars, and Singha Corp also showed their intention to jump on the Sabeco bandwagon.

Currently, Sabeco’s market share is about 46 percent, while 17.3 percent is held by another state-run brewer, Habeco, and 18.2 percent is grabbed by Vietnam Brewery Limited, which produces and imports many products, including Heineken and Tiger.