“Cardamom ale! It has cardamom; it is an ale,” says a nonplussed Navin Mittal, hands flapping, looking for more beer to try. At this Pune home brewers’ meet, murmurs travel around the table on how this home-brewed ale could have had more of a malt backbone to it. “Perhaps some cool aroma hops to fight the cardamom?” I enquire. Navin nods in distracted approval. 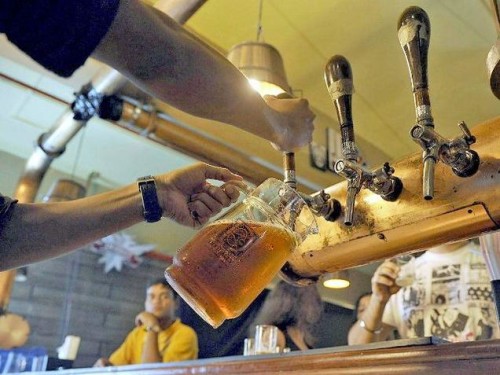 As one of the three co-owners and brewers of Gateway Brewing Company (GBC) in Mumbai, Navin is among the few at the helm of the craft beer scene. He started home brewing in 2006 to compensate for the lack of good beer choices in India. Over years of geeking over recipes and fine-tuning ideas, he and his partners developed custom malts. Today, 95 per cent of the malts used by GBC are made in-house, using Indian-grown grains.

Traditionally, beer has four ingredients: water, malts, hops and yeast. We’ve been malting cereal grains for millennia, and the idea is fairly straightforward. Around the time we learned to cultivate grains and grasses, we discovered that the enzymes in germinated grains would convert complex starches into sugars, giving prompt access to the starting point of alcohol. In parts of Nepal and Sikkim, finger millet (ragi) is fermented with nurtured yeasts to produce chaang, an example of the early beginnings of modern beer.

Back at the meet, home brewers wait for their beers (in repurposed plastic bottles) to be evaluated by like-minded people. Homemade Belgian ales, American wheat beers, and Kolschs are being consumed with keen attention. Sameer Madan proudly pours his Bavarian Hefeweizen with yeast collecting at the bottom — a gentle nod to the traditional style of bottle-conditioned, unfiltered beers in Germany. Nakul Bhonsle reveals his Riwaka ale: “Yes, it was brewed using New Zealand’s Riwaka hops.” There is excitement around the table as those who have only imagined what this brew tastes like begin to analyse it.

On closer inspection, a burst of aamras-like aroma greets me with lingering wet, grassy notes. The tropical fruit fragrances of these modern, aroma-forward hops from New Zealand break through the clean substrate of the pale ale, with the freshness of spring.

With the advent of refrigeration in the nineteenth century, lagers — a traditionally cold fermented beer-style from Germany — became the preferred choice of beers, given their longer shelf life, ease in controlling, and convenience in scaling to industrial levels. While there are several styles of lagers, pale lagers dominate beer consumption the world over, with slight variations in recipes leading to mild flavour differences, resulting in arguments about why one lager is better than the other. With over a hundred different styles of beers being brewed for centuries, it is a tad disappointing, yet unsurprising, that pale lagers which tread the line of mass-produced and easy-to-consume have the lion’s share of the market today.

Ales, however, are fermented at a higher temperature range (15-24ºC, as opposed to 4-8ºC for lagers), require less steadfast control during fermentation, and are ready for consumption sooner. The higher temperature range makes ales the perfect home-brewing experiment. Secondary flavour compounds add a dimension of complexity that is often lacking in industrialised lagers. Home brewers all over the world cherish these advantages and brew small batches – anywhere from five to 40 litres — of beer at a time. This gives them the ability to experiment with interesting ingredients, and develop new recipes and techniques.

Craft beer and the home brewer

The world over, craft beer companies have brewers who honed their skills through the humble beginnings of home brewing. By maintaining contact with the community, professional brewers get the opportunity to work on interesting recipes and ingredients that have filtered through layers of experimentation. This unique bond between beer companies that want to push the envelope and home brewers pursuing their passion has led to great creativity in the current Indian context. A brewery in Pune recently released an American-style pale ale that uses Japanese Sorachi Ace hops. These hard-to-find hops would have made for an expensive experiment at the microbrewery level, but after trying Nakul Bhonsle’s small batch experiment in a private tasting, it gave them confidence to move forward.

Similarly, Pune home brewers recently took part in a private contest to come up with the best-flavoured ale. The winning recipe was Sapan Maniyar’s Puneri Honey Basil Ale, which was brewed using locally found honey. This was generously appreciated by the Independence Brewing Company, who went on to make a batch using Maniyar’s recipe in their professional brewery. As one of the first home brewers in Pune, Sameer Madan has seen the industry grow: “The collaboration between home brewers and breweries introduces a degree of innovation and freshness which local breweries may have not considered in the past.” Microbreweries also need to worry about the bottom line, often steering them away from ideas that are far from the norm.

The Pune scene is a fragment of India’s burgeoning craft beer movement. In Mumbai, GBC is currently collaborating with home brewer Pratik Bavishi on their second anniversary beer coming out in the end of January. With microbreweries springing up in places like Bangalore, Delhi NCR, Hyderabad, and the Mumbai-Pune corridor, the inquisitive beer drinker is slowly being converted into a knowledgeable appreciator of good beer. There is plenty of hope for the growth of a more informed beer culture in India.

Mittal from GBC says, “India is already seeing very good growth, from two breweries in 2009 to about 65 today.” In terms of value in rupees, he says, “It is at least a Rs. 300 crore business now, and if craft beers were sold in bottles today, it could easily touch Rs. 1000 cr.” Currently, the laws of alcohol consumption do not allow businesses with a microbrewery license, like GBC, to bottle beers. However, with bottles of Bira 91, a craft beer company from the NCR, gaining recognition all over the country, Sameer Madan believes the tides are changing. People in bigger cities are beginning to demand choice and quality when it comes to beer. The route that craft beer in India will take over the next decade or so is still not known. But the brimming enthusiasm of home brewers seems to be an indicator that we are going to see more interesting beers enter the regular pub scene.

Will there be innovation in using other Indian grains, like jowar and ragi? The hop-intensive brewing practices in the west are beginning to stress hop farmers, as a recent Eater.com article says. Perhaps, we will see hop farms prop up in hilly and mountainous regions of India that will go on to produce uniquely flavoured Indian hops. Or maybe, some brewery will try replacing hops with bitter agents from Ayurveda? It is likely that as home brewers and microbreweries explore the Indian terroir, a lively collection of brews that are uniquely Indian will emerge.