When he left a job in banking to join a “company that sells fish sauce” in Vietnam, Michael Nguyen’s parents wondered if he was throwing away a lucrative career. Now a big cheese at Masan Group, one of the country’s largest listed companies, the Vietnamese-American seems happy with his gamble. Masan’s brands meet a big chunk of the local demand for pungent sauces, noodles and freeze-dried coffee—and in December the firm accepted a $1.1 billion investment from Singha, a Thai brewer, to help finance an assault on Vietnam’s frothy beer market.

Singha’s purchase of a 25% stake in Masan’s consumer-goods arm and 33% of its brewery capped a busy 12 months for mergers and acquisitions in the country. Their combined value in 2015 is reckoned to have been around $10 billion (see chart). Overall foreign direct investment into Vietnam began to pick up, after a slump following the financial crisis. More big deals are “percolating”, reckons Fred Burke of Baker & McKenzie, a law firm. This month All Nippon Airways of Japan said it would pay $108m for an 8.8% stake in Vietnam Airlines. The government may soon sell a $1 billion chunk of Sabeco, the country’s biggest brewer, and a stake of around $2.5 billion in Vinamilk, a dairy firm.

All this reflects renewed optimism for Vietnam, a country of 93m people with a median age of around 30 and an economy expanding by nearly 7% a year. Its consumer sector is particularly appealing. Vinamilk’s revenues have been growing more than 20% annually; per-capita beer consumption is the highest in Asia after China and Japan, and rising. Masan’s latest wheeze is animal feed, as it hopes to gain from the rising consumption of fresh meat.

In part the country has benefited from its neighbours’ weaknesses. Despite lower productivity and limited local supply chains, Vietnam’s manufacturers are gradually taking business from China, where wages are higher. Elsewhere in the region, Indonesia is shrinking back into protectionism; political scandals are unsettling Malaysia. And Thailand’s companies are keen on tie-ups in Vietnam, to flee low growth and irascible military rule at home. 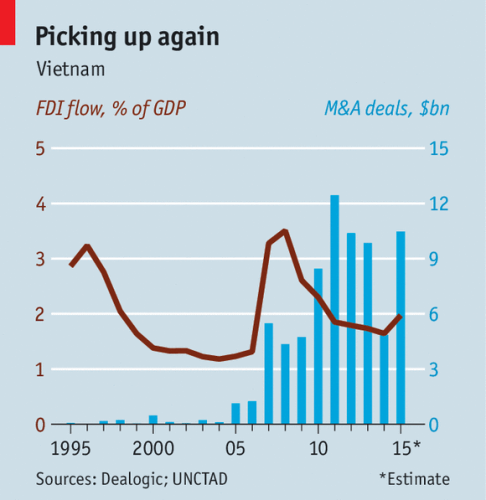 But foreign enthusiasm has also been greatly boosted by a barrage of trade agreements which the government negotiated in 2015—not just the American-led Trans-Pacific Partnership but also a hodgepodge of treaties with places including Europe, South Korea and Japan. Meanwhile a new law on investment and enterprise, passed in 2014 but only implemented last summer, has cut red tape. Vietnam ranks mid-table in the World Bank’s ease-of-doing-business index, but is inching upwards. Foreigners often find it easier to operate in Vietnam than in China, and its recent reforms compare favourably with those elsewhere in South-East Asia, says Alberto Vettoretti of Dezan Shira, a consulting firm.

There are plenty of frustrations, nonetheless. The unusual esteem which has accrued to Vinamilk—praised at home and abroad as a paragon of corporate governance—says as much about the grimmer standards among other Vietnamese firms. Even many well-run ones have a disconcerting taste for adventurism: Mr Nguyen promises that Masan will be picky with its investments, after its bet on a tungsten mine turned sour.

There is also more for the government to do. Despite a few recent exceptions, reform of the flabby state sector has been a let-down, with many state firms selling only tiny slivers of equity. A promise to lift caps on foreign ownership of listed firms—for the moment limited to 49% in most industries—is bogged down in bureaucratic twaddle. Kevin Snowball of PXP Vietnam Asset Management says the representatives of foreign institutional investors who turned up “in droves” late last year were disappointed at the limited liquidity of, and restricted access to, Vietnam’s stockmarkets that they encountered.

All this makes more important the decisions to be reached at the five-yearly congress of the Vietnamese Communist Party, which began in Hanoi on January 21st. By the time it concludes, on the 28th, some or all of the country’s top officials could be replaced. Most of Vietnam’s local and foreign businesspeople would like to see Nguyen Tan Dung, its prime minister for the past ten years, retain high office. He holds some blame for leading Vietnam into a deep banking crisis from which it is only now emerging, but he is also credited for a competent clean-up and for the many pro-business policies which have followed. Yet the latest rumour is that Mr Dung, and perhaps some of his younger allies, will be sidelined by a conservative faction loyal to Nguyen Phu Trong, the present party leader.

That would somewhat dampen spirits among businesspeople and investors. But it need be no disaster. Analysts worry that the pace of liberalisation could soften, but few expect the direction of reform to reverse. For one thing, Mr Dung’s trade deals mean that once-vague party promises have now been written into international treaties, notes a Vietnamese economist and government adviser. “The only way is forward,” he insists.