Karnataka, which was earning good revenue hitherto through the sale of ‘cheap’ liquor outside the State, has been hit badly over the last few months, ever since Andhra Pradesh made a foray into the market.

This reverse trend, coupled with the continued inflow of the low cost liquor from Goa, has dented the State Excise department’s revenue mobilisation to quite an extent.

Over the years, the department had gained a monopoly over sales of liquor in the districts bordering Andhra Pradesh, Tamil Nadu and Kerala. Karnataka’s sales boomed especially after Kerala started to implement prohibition of liquor sales in a phased manner.
However, not wanting to be left behind, Andhra Pradesh by introducing its new liquor policy, has heavily slashed taxes on Indian Made Liquor (IML) to boost its sales and revenue. 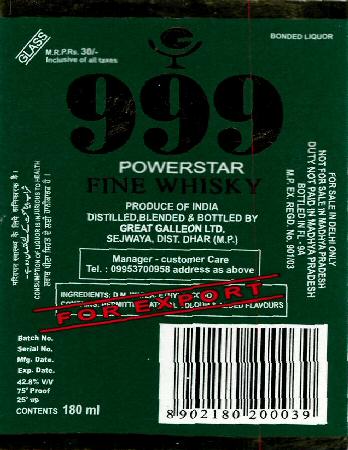 According to officials, it launched a cheap liquor brand ‘999 Powerstar Fine Whisky’, which is priced between Rs 42 and Rs 45 per 180 ml bottle. This is considerably cheaper than the brands like Raja Whisky and Haywards, which are sold at Rs 50, by Karnataka. As a result, the sales, which had peaked over the last few years in the bordering districts of Raichur, Ballari, Chitradurga, Tumakuru, Chikkaballapur and Kolar, have come down drastically.
Excise Commissioner S R Umashankar said that the department is also watchful of the Andhra Pradesh brand making its way into Karnataka.

“Until now, our liquor was the cheaper and we registered good sales in the bordering districts, which included consumers from the neighbouring State, as well. With the introduction of the 999 whisky brand, our revenue mobilisation has been dented marginally. Like the Goa and Maharashtra borders, which are porous, the same problem persists on the Andhra and Telangana borders, as well. In Dakshina Kannada we have increased vigilance to check the inflow of Goan liquor, and now we are doing the same on the Andhra-Karnataka border as well.” Between April and December 2015 alone, the department has seized close to 7,500 litres of liquor entering into the State from Goa.

“Goa border (Anmod and Majali) is our main problem. Owing to the low level of taxation, Goa liquor is available at much cheaper rates. Though we have set up two checkposts, liquor is illegally transported not only by boats and trains, but also through forests,” the commissioner said.