You can make the best products in the world, but distributing them to customers is where a consumer company wins big.

That’s why Amazon is planning to enter the logistics and bricks-and-mortar businesses and also explains Asahi’s decision to spend $2.9 billion picking up the Peroni and Grolsch brands that SABMiller is shedding ahead of its takeover by Anheuser-Busch InBev.

Japan’s largest brewer has a great brand in its home market, but struggles for traction elsewhere. Meanwhile, Japan’s increasingly cosmopolitan nightlife is stoking demand for exciting new beverages. By placing leading European and Asian beer brands under one corporate umbrella, Asahi wants to give each side more prominence in its respective export markets.

That’s the theory, anyway. Pulling it off will be a lot harder.

The globalization of Asahi beer is certainly in need of a kick. Overseas sales volumes rose about 36 percent from 2011 to 2014, according to the company’s 2014 annual report. That sounds healthy until you consider that Carlsberg, an equivalent brewer focused on a single core brand, added 64 percent to its Asian sales volumes alone over the same period:

A telling fact buried in Asahi’s takeover-talks announcement Wednesday night is that the real crown jewel of the businesses it’s picking up isn’t the Peroni or Grolsch brands. Nearly half the earnings come from Miller Brands, a beer distributor SABMiller uses to bring European and American commercial labels into the U.K.:

That makes a lot of sense. Beer, especially mass-produced lager like Asahi’s Super Dry, is a fairly commoditized product. Modern contract breweries can typically turn out a range of different brands more or less at the flick of a switch. Distribution, on the other hand, is based on relationships. It’s bespoke, and hard to replicate. Even the mighty AB InBev, which commands more than a fifth of the global beer market, hasn’t been able to reduce its delivery costs to much less than 10 percent of revenues: 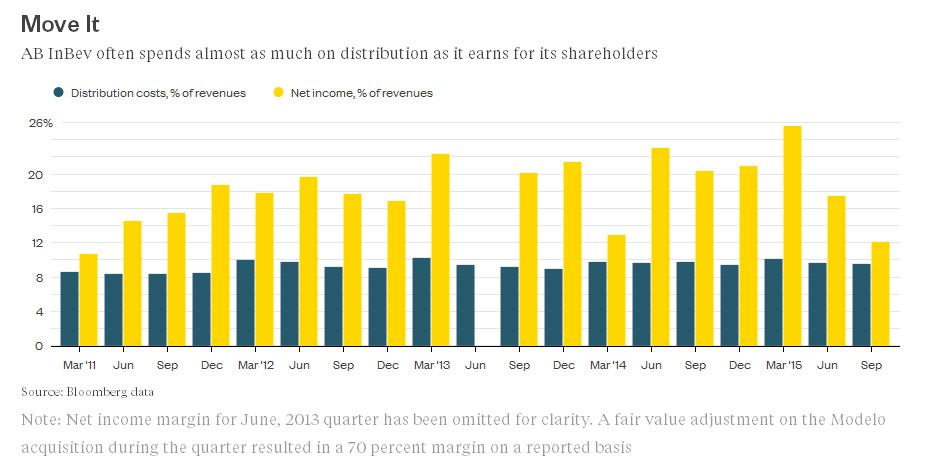 Asahi looks to be paying a high but not excessive price for this sales channel. The multiple of about 30 times Ebit is nearly double the median 15.5 times from 20 brewery takeovers worth more than $1 billion, according to data compiled by Bloomberg. Then again, it’s only a shade ahead of what AB InBev is offering SABMiller, and a rather smaller multiple than the one SABMiller gave Grolsch back in 2007. Set against book value, the 4.6 multiple is almost bang on the 4.7 median of 21 deals, the data show.
Brewers’ Mash

The bigger issue is not really the price, but the question of whether this deal will do the job. Sales revenues have been falling for two years at Peroni and are static at Grolsch; Ebit at each brand declined about 27 percent last year. Miller Brands has been delivering a captive portfolio of SABMiller labels to date, and may not be quite so profitable if it has to compete on more arms-length commercial terms or loses its remaining SABMiller brands altogether.

Distribution of physical goods can also resemble the virtual supply chains assembled by tech companies: if you’re an Apple or a Google you have some muscle, but second place is first loser. And Asahi’s not buying itself anything so strong as a second-place label: neither Grolsch or Peroni are even in the top 10 European brands by volume.

If the acquisition can help Asahi cement its place as a global brewer, it has promise. But it’s not a deal investors should drink to just yet.