Beer is said to be one of the world’s most widely consumed beverage. It is the third-most popular drink after water and tea.

So, the Beer Cafe Biggie – a pub dedicated to the drink — has opened in Kormangala 4th block, near Maharaja Signal. A variation of The Beer Cafe in Indira Nagar, it has it all – beer, beer-based cocktails and delicious starters and food that goes well with beer.

There are twenty-nine varieties of beer which includes six signature beer-based cocktails and regular draught and bottled beer.

Even the beer agnostics will enjoy the cafe’s cocktails. 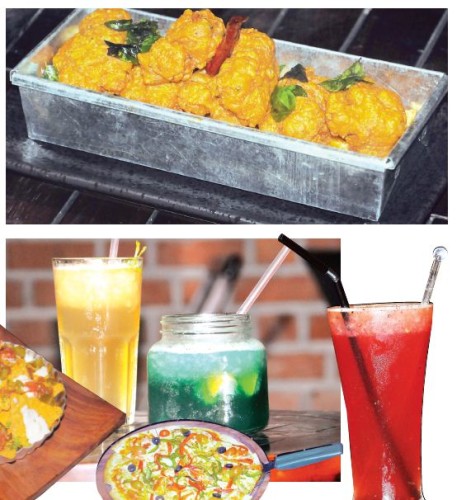 There are citrusy and bittersweet beers. Beer Rita has a combination of Triple Sec, Tequila and lime which gives a mild buzz with the bitterness of beer and sourness of the citrus fruits. The Blue Flip is a refreshing tropical experience with its blend of passion fruit and blue Curacao liquer, which draws its flavour from a tropical fruit found in a Dutch Carribbean island.

Some have overdone the sweet, like the Crazy Nut — which reminds you of a mild cough syrup. The raspberry in this cocktail gives it a red colour.

Since the summer is here, you could try the beerijito, a beer version of the classic mojito, with white rum and a dominant mint flavour. Or the beer mule with a blend of vodka, beer and lime juice, and a hint of ginger. The cocktail is toppped with slices of cucumber which leaves a strong smell and bitter taste of cucumber.

Most of the cocktails have lime and mint flavours.

Sweet Pepper with pepper granules and flavours of strawberry and grape, is predominantly sweet.

The food here has been paired well with the beer. The Calcutta Chilly Chicken is the best starter. The Indo-Chinese preparation with a Bengali flavour has soft, spicy and saucy chicken pieces. The Kohliwada Fried Chicken is a Mumbai-special preparation. The crispy chicken, served with fries tastes better, creamy and sweet when dipped in chipotle mayo.

The Stadium-styled Nachos is prepared with tomato salsa, cheese and jalapenos. It is less creamy and that so keeps the crispiness of nachos. The Prawn Butter Garlic has tiger prawns basted in garlic butter sauce. The chilli flakes on the prawns add to the light-garlic butter flavour.

The cafe has three different sections, done up for a casual dining experience. The outdoor seating has barrel-shaped couches. Instead of the S-shield, the Superman here wears the beer logo. The graffiti and the beer quotes on the walls of the rooms and cushions make it look trendy and cool. The menu is also in the shape of a beer barrel. You could have office meetings with beer at the cafe’s soundproof conference room.

The Beer Cafe will be open to public this Monday.