Heineken intends to become the market leader in Myanmar’s beer market by 2020, confident that it can beat local and foreign products in one of the biggest emerging markets in the Asia Pacific region. 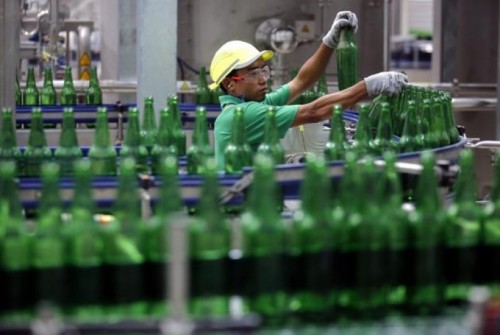 “We are the last brewery to come to the market. Currently, we are No 5 in the market. We hope to move up one position every year. Next year, we want to be No 4. After that, No 3, No 2, and eventually we aim to be No 1 in the market,” said Lester Tan, managing director of APB Alliance Brewery, the producer and distributor of Heineken in Myanmar.

Sales of the Dutch beer started six months ago. It is competing fiercely against local and foreign brands like Myanmar, Dagon, Mandalay, and Tuborg, a product of Carlsberg, which has gained more popularity despite controversies. Before Carlsberg started production in May 2015, the market had been dominated by local brewers.

Tan said that Myanmar showed huge market potential thanks to its fast urbanisation, population growth, economic expansion and increasing middle class. He believed that Myanmar would follow Vietnam, which has become one of the top three biggest markets of Heineken International in Asia Pacific in less than 10 years.

“Myanmar will be of growing importance to our global company too – and might become our next star country,” he said, adding that Myanmar’s per capita beer consumption is only three litres – much lower than its neighbour Thailand.

“This leads to a lot of room for growth for all players in the market. The whole beer market is growing so fast. Though we only started selling about six months ago, we were slightly above our plan. So we are happy with our business performance. The future is very, very good,” he said.

Tan sees the possibility of increasing investment soon due to overwhelming demand. The success story convinced him that the company – with marketing strength and strong relations with business partners – should not worry about the “Myanmar” beer and other domestic brands.

Heineken has invested US$60 million (Bt2 billion) in a beer factory in Yangon, which started operations last July with annual capacity of 245,000 hectolitres. It produces four brands – Heineken, Regal Seven, Tiger, ABC Extra Stout. As of February 28, the company employed 245 people including 56 female staff. Only 9 are expats.

This year, Myanmar is included in the UEFA Champion League trophy tour for the first time. The trophy tour will be in Yangon from March 20-26, accompanied by former Arsenal star Fredrik Ljungberg.

“Football is the most popular sport in Myanmar. Whether it is in the streets or the stadiums, and at teashops and sports bars, fans go all out to watch a match and support their favourite teams. We can’t wait to champion the trophy,” said Ko Ko Thein, deputy administrative director of Myanmar Football Federation, at the ceremony where the tour schedule was announced.