Troubled tycoon Vijay Mallya may offer his shares in United Breweries (UBL) to partner and Dutch beer giant Heineken to generate cash for a possible settlement with lenders of the defunct Kingfisher Airlines. If the lenders respond positively, the latest development offers Heineken a clear opportunity to gain controlling ownership of UBL, the largest domestic brewer and the last big Indian company which Mallya helms.

Mallya’s counsel made an offer before the Supreme Court to pay Rs 4,000 crore to settle with a consortium of banks fighting to recover unpaid loans. The proposal rests heavily on his ability to divest shares in UBL, in which Heineken owns nearly 44% while Mallya’s holding is slightly above 32%.

“This offer will be met from two sources — shares in UBL and a residual stake in United Spirits. Mallya will have to offer shares to Heineken as the latter has pre-emptive rights on them,” said a source close to Mallya on condition of anonymity. The Supreme Court, depending on the response from the banks, will have to lift a lower court freeze on Mallya and his Indian investment company UB Holdings selling assets, the source added.

An emailed query to Heineken remained unanswered. The Amsterdam-based company had earlier told TOI that it was watching developments involving Mallya. A spokesperson for Mallya said, “We have no comments to your queries.” 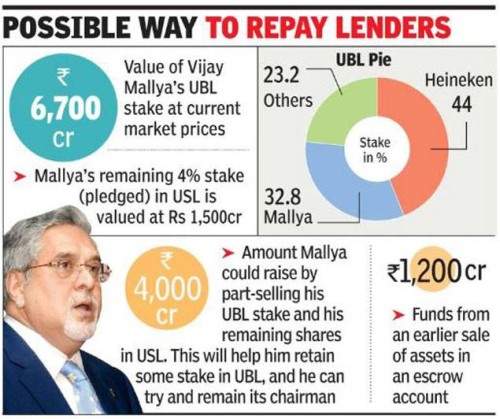 UBL has a current market value of almost Rs 22,000 crore, rendering Mallya’s stake worth Rs 6,700 crore, or a little over $1 billion. Mallya, who recently resigned as chairman of United Spirits, will look to offload his remaining 4% stake in the distiller. However, Diageo Plc, which acquired USL from him, already has controlling shares and has no right of first refusal on these shares. Mallya’s shares, though pledged, are worth about Rs 1,500 crore.

In context, Mallya would part-sell his UBL stake as part of the loan settlement and try to remain its chairman. The latest settlement offer along with Rs 1,200 crore (from an earlier sale of assets) in an escrow account would cover the Rs 5,000-crore principal loan amount payable to the banks, sources added.

In 2009, Heineken entered into an equal joint venture with Mallya to jointly run UBL but hiked its holding through market purchases of Mallya’s shares sold by the banks in the past two years. These transactions freed Heineken from the ‘equal shareholding and joint management’ clause, TOI reported in July last year. This had set the stage for Heineken to claim management control, but the foreign partner was in no tearing hurry given its cordial ties with Mallya.