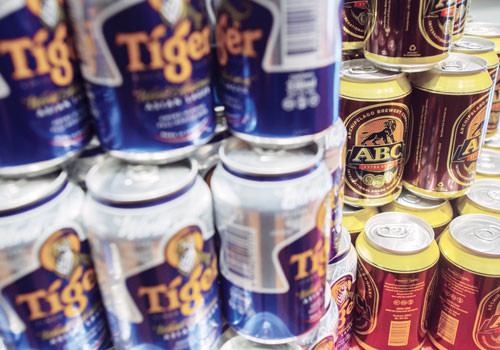 Myanmar Brewery gave up its rights to the brands when it split from Singapore-listed Fraser and Neave last year after a drawn-out ownership dispute. F&N owned the rights to produce both beers.

Last August, the licences expired and Myanmar Brewery has not sold ABC or Tiger since. In the past, Heineken held both licences and has now taken them back.

“As the licence holder, they did a good job penetrating the market to ensure [these beers] are significant brands to Myanmar drinkers,” said Lester Tan, managing director of APB-ABC.

Tiger and ABC will now be brewed at APB-ABC’s new US$60 million brewery in Hmawbi township which opened in July last year.

When they return to the shelves, the beers will look a little different – they have been re-designed to reflect a more modern look with a stronger quality, said Mr Tan, adding that the ingredients and the taste will remain unchanged.

The other two brands are Heineken and a new, locally produced beer called Regal Seven which will target the mainstream market, competing head-to-head with Myanmar Brewery’s Myanmar Beer.

Mr Tan said his company has contracts with around 150 beer stations and is selling bottles and cans to over 4000 stores. This is very low compared with the number of stations and shops across the country, he said, but growth is held back by brand competition laws.

Hiroshi Fujikawa, Myanmar Brewery’s CEO, told The Myanmar Times last year that losing Tiger and ABC was a blow. “It is always sad to say goodbye to something you have become familiar with, but it’s also important to innovate and to take on challenges,” he said, declining to discuss specific details of the contract.

“There were no licence fees. Those brands belonged to Heineken – it was their right to terminate the contract, so we had to give it up.”