“Studies show that from 2010 to 2015, craft beer in China has grown in market share by about 23 percent,” Donnie Everts, vice president of international development for World of Beer tells FOXBusiness.com.

And, that’s actually why the Tampa-based franchise is making its way to Shanghai in May.

“The numbers by volume are huge, and as the craft beer movement is exploding globally, World of Beer feels like the timing for entry into China could not be better,” adds Everts. 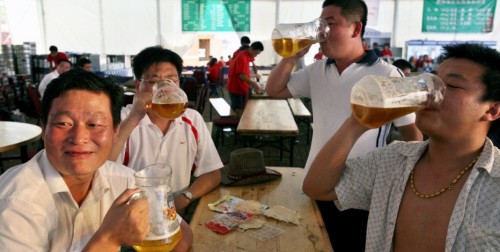 The franchise is already in 20 states across the country, with Shanghai being its first International location. Cong Yin, a franchisee at World of Beer Shanghai, says they have plans to open at least three more locations in the next three years.

“The craft beer movement is already happening in China – and the younger generation is demanding alternative options in beer choices. Also as a result of rising disposable incomes of the general population, premium brands are becoming much more popular and affordable,” Yin tells FOXBusiness.com.

Other big beer companies are taking notice to the growing market as well. In 2014, Anheuser-Busch InBev (BUD) acquired two Asian breweries; Jilin Ginsber Draft Beer and Jiangus Regal Beer. And according to the Euromonitor report, stout witnessed the fastest volume growth among all other beers in 2014, up by 85% — this alongside the rising number of pubs, bars and Western restaurants in China.

Yin says Snow Brands, a joint venture between SABMiller and China Resources Enterprises, is the most prominent beer available in China and currently the best-selling beer brand in the world.

“However, craft beer is now beginning to fill the narrow gap between selections that have been available in the past,” he adds.

World of Beer says after Shanghai, its next focus will be India and the Philippines.