On why the author has happily switched from 571-year-old Hoegaarden to toddler upstart Bira 91.

The husband and I recently began dating again. Once a week, Babyjaan is packed off to the in-laws, where she indulges in otherwise banned activities such as eating dinner on the bed while watching Chhota Bheem on television.

So there I was, on a Friday evening, riding behind the husband on the Bullet I had cajoled him to buy some years ago (because how can anyone buy any other Indian bike), headed to the neighbourhood store to pick up my other favourite Indian brand, which also begins with a B.

The reason I head out every time I want to buy Indian craft beer Bira 91 is because I can’t stay away from it when I stock it at home.

After becoming addicted to Bira 91 Blonde (hoppy Czech-style pilsner) and Bira 91 White (Belgian-style wheat but more citrusy), I’ve happily switched from 571-year-old Hoegaarden to this toddler upstart. I can’t wait for their pale ale to be launched in October. 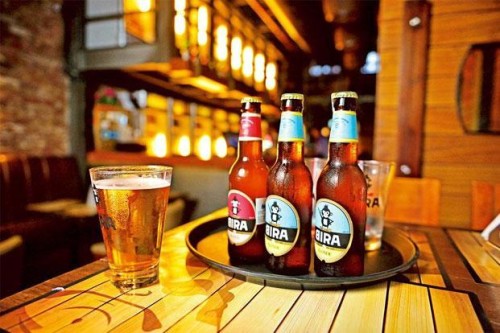 While one has always been immensely comforted by and stayed faithful to the global greats (Hoegaarden, Asahi, Guinness, Schneider Weisse, Stella Artois, etc.), the American beer revolution in the past decade has driven me to a string of one-night stands, some of which have developed into longer dalliances. And I can’t get enough. A visit to the US is characterized by daily infidelity; meaningful relationships have been forged with the brews from Dogfish Head and ales with endearing names such as Arrogant Bastard. Thanks to a friend, I drank Gandhi-Bot before non-resident Indians forced the brewery to change the name to G-Bot and replace the brilliant robotic depiction of Mahatma Gandhi on its can.

India’s beer scene, especially in Bengaluru, has always been characterized by the Kingfisher mafia (sorry, we only serve Kingfisher ma’am). Peroni is marketed as a “designer” brew here—surely even the Italians know it’s no fun? Thankfully, Bengaluru also has brewpubs such as Toit and Arbor Brewing Company where the taps overflow with all hues from pale to pumpkin. Seriously, Toit brews a special ale every Halloween that is infused with roasted pumpkins, spices and jaggery. The creepy ambience is courtesy Dracula, a bhatakti atma (wandering soul) dressed in a white sari and assorted other monsters. Personally, I prefer the zero fuss Toit Weiss, available through the year. At Arbor, it’s usually the Belgian Tripel or Phat Abbot before we rush across the road to watch the latest B-movie, which is instantly rendered several degrees more enjoyable. My first love was Dansberg, named after its equally loveable owner Danny Denzongpa, drunk alongside coffee liqueur in Sikkim while on a college holiday.

Bira 91’s two beers were launched about a year ago by Cerana Beverages (now B9 Beverages Pvt. Ltd), a company that previously imported craft beers from around the world. Even hard-nosed venture capital firm Sequoia Capital invested Rs.40 crore in B9 Beverages Pvt. Ltd in January. The beverage company used a chunk of this money to set up a brewery in Indore, and by June, Bira will be not just “Imagined in India”, as their tag line now says, but also made here. Until now, Bira was manufactured in Belgium and imported home, so some folks refer to it as a Belgian beer trying to be Indian. The company’s response: iPhones are made in China, but does that make them Chinese?

Nobody can dispute Bira’s success. One year after its launch, the beer has started selling 50,000 cases a month. It’s become the largest selling premium beer (competitors include Kingfisher Ultra, Peroni, Budweiser, Carlsberg, Heineken) in bars and restaurants in Delhi and Mumbai, where it’s available in draught and bottle. Incidentally, Bira’s highest sales are logged at Tamasha Bar, located right next to the Mint and Hindustan Times office in Delhi #justsaying.

Its blue/red bottle caps featuring the Bira monkey are slowly acquiring cult status on Instagram, where the images include a banana and chocolate chip Bira bottle cap birthday cake for Mona and a woman wearing a Bira crown choker (or maybe that’s Mona in person?). Bira’s growth has come without a traditional marketing campaign.

Now the company has an ambitious plan to replicate this word-of-mouth success in New York, where it is an official sponsor of the Tribeca Film Festival this year and where it will be available from next month. Who knows whether or not consumers will pick Bira from the hundred or so beers available at the Whole Foods supermarket, but Bira founder and chief executive officer, B9 Beverages Pvt. Ltd, Ankur Jain, is determined that it won’t be the “Cobra of craft”—or the Indian beer that everybody drinks mostly with their tandoori chicken.

Thirty-five-year-old Jain grew up in Delhi with an urban planner father and an interior designer mother. He studied computer science in the US and his past life includes a stint at Motorola developing applications for mobile phones and a healthcare management start-up. His father couldn’t understand why his son gave up that life, returned to India and began to import beer in 2008. He’s since come around.

Jain says his weight has risen from 72kg to 85kg courtesy all the beer tasting he does. “My friends sometimes joke that the 91 in the name refers to my weight,” he says. It represents the country code, actually. Jain’s an even-tempered jovial chap, the kind of guy who keeps friends for life. He went to school with his chief operating officer.

As for Babyjaan, she won’t know the joys of Bira for many years to come, but she’s a huge fan of Royal Enfield and can recognize the sound of a Bullet a mile away. She knows how to operate the keys, has her own helmet and avoids dismounting on the silencer side; her life’s ambition is to grow tall enough to kick-start the bike.

Thankfully, they say, it’s difficult to do a wheelie on a Bullet.