Overseas banks have now started to tighten the screws on the beer baron who scurried out of India last month after a passel of local banks declared him a wilful defaulter and initiated court proceedings to recover over Rs 9,000 crore in unpaid loans.

The Royal Bank of Scotland (RBS) has now declared that it will stop offering banking services to Kingfisher Beer Europe Ltd (KBEL), the London-registered company that markets the eponymous beer that has a 36 per cent market share in India.

In a filing with the US securities regulator, Securities and Exchange Commission, earlier this week, Mendocino Brewing Co Inc said RBS had informed KBEL of its intention to terminate “all banking services” from May 31. 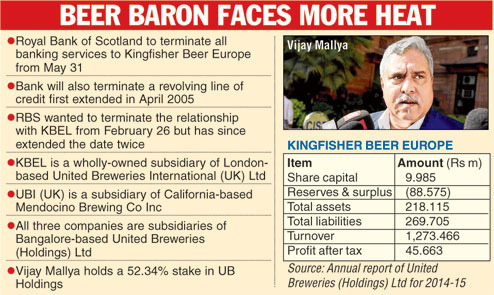 Mendocino is a Mallya-owned maker of specialty beers and malt beverages based in California and listed as “intermediate parent” of KBEL in the latter’s filings with Companies House, UK’s registrar of companies.

RBS wanted to terminate the relationship with KBEL from February 26 but has since extended the date twice.

KBEL’s financial statement for the year ended December 31, 2014 – filed with Companies House in September last year – lists RBS as its only banker.

The RBS move could not have come at a worse time for Mallya. Last week, a two-member bench of the Supreme Court asked the tycoon’s counsel to submit an affidavit by April 21 indicating when he intended to return to India and start a meaningful dialogue with a consortium of 17 local banks to clear their dues.

Last Saturday, Mallya also failed to appear before the Enforcement Directorate (ED) to respond to questions over an alleged money laundering investigation relating to a Rs 900-crore loan extended by IDBI – the third time he has ignored the ED’s summons. The earlier summons had sought his appearance on March 18 and April 2.

KBEL had signed an agreement in April 2005 for a £1.75 million (roughly $2.8 million) revolving line of credit with an “an advance rate based on 80 per cent of KBEL’s qualified accounts receivable”.

“The credit line carries an interest rate of 1.38 per cent above the RBS base rate and a service charge of 0.10 per cent of each invoice discounted,” Mendocino’s filing with the SEC said.

But on November 24, 2015, KBEL received a notice from RBS in which the bank said it intended to terminate the credit line on February 26 this year.

The Mendocino filing said KEBL was in talks with third parties to “find alternative financing to replace the credit line and other banking services presently provided by RBS”.

KBEL’s immediate parent is United Breweries International (UK) Ltd which, in turn, is owned by Mendocino. Mallya retains control over these overseas units and, through them, parts of his overseas empire which is tightly controlled through a network of shell companies registered in well-known tax havens.

Documents reveal that KBEL has been granted an exclusive licence by United Breweries Ltd of India that confers “rights to brew, market, develop and sell Kingfisher Lager in the United Kingdom”.

This pact and secondary agreements with United Breweries International (UK) Ltd are due to expire in October 2018.

The company has in turn granted a sub-licence for brewing Kingfisher beer in London. “In October 2013, the holder of the brewing sub-licence changed from Shepherd Neame Ltd to Heineken UK.”

In October 2013, Heineken UK provided KBEL with a secured term loan facility of £1 million to be repaid in 12 equal quarterly instalments starting January 2014 along with interest at the rate of 5 per cent above the Bank of England base rate. The principal outstanding at the end of September 2015 was £416,700.

For the year ended December 31, 2014, KBEL reported a turnover of £13.46 million, which is “principally derived from the sale of Kingfisher beer”, the company said in its financial statement.

The financials of Mendocino Brewing, United Breweries International (UK) Ltd and KBEL are consolidated in United Breweries Holdings Ltd – the BSE-listed company that controls Mallya’s diverse interests. UB Holdings has a 68.1 per cent ownership interest in all three companies.