The Chinese beer market is the world’s largest, yet it is experiencing negative volume growth after growing continuously for the past 24 years, according to China Alcoholic Drinks Association (CADA). Industry insiders say domestic beers have to look for new strategies to stimulate their growth in the next three to five years.

Secretary General of CADA Yong He said the tremendous annual growth of the domestic beer market would no longer exist. Instead, it will experience periodic growth, as the Chinese market matures.

“Carlsberg in particular has benefitted from the acquisition of Chongqing Brewery and a strategy of premiumization,” he said. “In terms of brand penetration, 80% of consumers drank Tsingtao in the 12 months to June 2015, 77% drank Snow, and 66% drank Harbin.”

In addition, only 1% of Chinese consumers drink international beer exclusively, according to Moriarty.

“In general, beer is a local product in China. It is not uncommon for some beers to be the most popular in the region of origin but unavailable elsewhere in the country.”

However, Chinese beers are cheaper and weaker than international beers on the whole, Moriarty added, because a lighter and sweeter flavor fits Chinese consumers. “Carlsberg launched Carlsberg Chill to tap into this market,” he said. 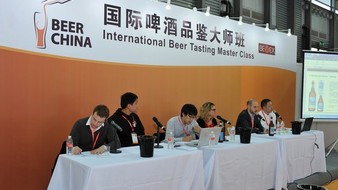 Chinese consumer insight expert, Danpeng Zhu, said beer companies in the country are redesigning their products in order to fit the consumer trends in 2016. Meanwhile, international brands will continue to grow in China, he said.

Even though most Chinese consumers don’t drink foreign beers because they don’t know much about them, Moriarty said, there will be growth especially in smaller, niche breweries from international craft brands, like BrewDog, thanks to Haitao.

Haitao refers to buying foreign products online from overseas or domestic websites in Mandarin. Moriarty suggested more international beers should take the opportunity to target consumers in China, who will be willing to try new products and purchase them online.

Overall, western trends will continue to influence Chinese consumers’ habits and lifestyles, Moriarty added, but the traditional strengthen of domestic beer brands will not be massively impacted.

Premiumization is the biggest upcoming trend

Whether it is trading up to new flavors, functional beers, international brands or limited edition beers, Moriarty believes premiumization will be a continued trend for Chinese consumers who want experience and flavor from their beer.

If it is assumed that craft beers form part of the premium segment because they are stronger and more expensive than mass produced lagers, Moriarty added, that segment overall has enjoyed a growth of 7.4% to a value of RMB 26.8 billion from 2011 to 2014.

In addition, Moriarty predicts that functional ingredients will be well received by Chinese beer consumers.

“So there is potential for ‘beauty beers’ and ‘healthy beers’,” he said. “Especially as the government’s anti-extravagance campaign has cut down consumer spending on alcohol out of home, brands that offer a beneficial experience for relaxing at home will do well.”