A consortium of banks led by State Bank of India (SBI) on Wednesday filed counter-objections in the debt recovery tribunal (DRT), Bengaluru, against a claim of Rs 594 crore made by the Vijay Mallya-controlled United Breweries (Holdings) or UBHL. Lenders alleged Mallya’s claim to secure the amount from them at this stage was a clear-cut tactic to delay the process of justice, knowing fully well that the case was on the verge of being disposed of. Admitting the lenders’ counter-objections, DRT presiding officer justice CR Benakanahalli posted the matter for further hearing to April 21.

On April 5, UBHL had filed its objections before the DRT stating that lenders sold pledged shares of United Spirits at a lower price, causing the company losses. UBHL had pledged these shares as security against Rs 7,000 crore in loans to Kingfisher Airlines. 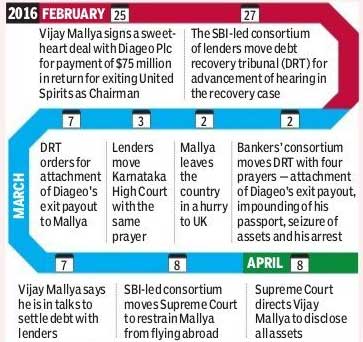 On Wednesday, lenders argued in their written submission that UBHL should have filed its objections on or before May 6, 2014. They said they had proceeded with the sale of shares as per the provisions available to them under the Recovery of Debt Due to Banks and Financial Institutions Act, 1993. The lenders also said UBHL should substantiate its claim with full proof of documents and evidence.

UBHL is understood to have contended that lenders had sold 2.6 million shares pledged with them hurriedly in April 2013, realising just Rs 1,836.94 apiece whereas the share value touched a high of Rs 4,080 apiece in April 2015. This, UBHL said, had caused it losses.

In April 2013, lenders had sold shares of United Spirits pledged to them following the failure of Kingfisher Airlines to repay its dues amounting to Rs 7,500 crore at that time.

Lenders also asked the DRT to extend its March 7 order directing Diageo and United Spirits to hold back the payment of the $75-million exit payout to Mallya as per their agreement reached on February 25. The DRT had also ordered the attachment of the $75-million payout until the disposal of the original application. SBI also filed a memo seeking the deposit of the $75 million with the DRT.

Further, lenders sought the attachment of the sale proceeds of Mallya’s private aircraft parked at Mumbai airport by the service tax department. The auction is being conducted by the department on May 12 and 13 to recover their dues, lawyers to SBI said. The department is auctioning Mallya’s private aircraft — an Airbus A319-133ACJ (Airbus Corporate Jet) — to recover over `370 crore in dues and penalty. Last year, the Bombay High Court had given the green signal for auctioning the aircraft, which had been leased to Kingfisher Airlines.