Folks in Vietnam sure do like a cold one. Since gaining broad popular appreciation in the 1990s, beer sales have soared and the country has become one of the largest per capita consumers in the region.

Not that there is not a tradition of beer drinking in the country. The famous freshly-brewed bia hoi can still be found on street corners here and there, but it is in the mass-produced larger sector that things have come on in leaps and bounds. 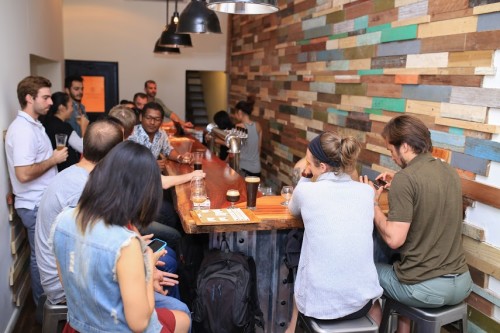 The Vietnam Beverage Association reports that in 2015 the country consumed 3.4 billion liters of beer, roughly 38 liters for every individual in the country. This was up 10 percent on the previous year, and a whopping 41 percent compared to 2010.

Local brewing giant Sabeco and its range of mass-produced blond largers accounted for slightly less than half of market share, but foreign brewers such as Sapporo and AB-InBev are moving in aggressively also.

A lot of the uptick in consumption is down to the fact that, well, beer is cool again with young adults. Since 2010, ‘beer clubs’, as they are known, have sprouted all over the country. These drinking palaces are pretty much as the name describes: lavishly decorated venues pumping out dance music, with crowds of people gathered in groups drinking beer from a tower device so they can self-serve. The bathrooms come complete with basins set aside for drinkers to purge themselves before returning to the action.

But there are signs, albeit small in the big picture, that the beer market in Vietnam is evolving. Craft beer is ubiquitous in much of the Western world, and local craft brewers are starting to make their presence felt in Vietnam.

Arguably the first to really get the ball rolling was the Pasteur Street Brewing Company, named after the venerable boulevard that bisects downtown Saigon. Unlike most start-up small brewers, they initially only sold their product through their own taproom, located, naturally, on the same street.