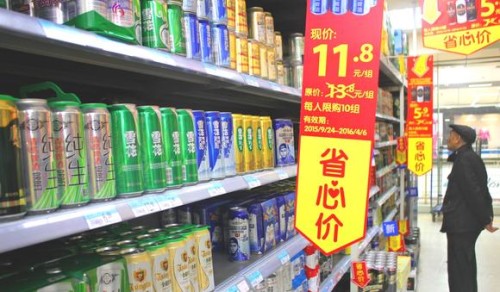 China Resources Beer held its earnings briefing for the year through December 2015 in March. Speaking in Hong Kong, Hou Xiaohai, CEO of the company’s key China Resources Snow Breweries unit, said that because the Chinese beer market is so competitive, it is getting harder to pursue growth in volume.

Sales at China’s largest brewer stood at 34.8 billion Hong Kong dollars ($4.48 billion) in its beer operations last year, up 1% in revenue terms from a year earlier. Sales volume dropped about 1.3% on the year to 11.68 million kiloliters. Overall, China’s beer market appears to have shrunk about 5% by volume. To address this problem, China Resources Brewery said it will move upmarket, focusing more on midrange and higher priced products.

Other major Chinese brewers are also suffering from poor sales. Second-ranked Tsingtao Brewery posted declines in both sales and profit. Its sales volume slipped about 7.3% on the year. Beijing Yanjing Brewery, which ranks fourth, saw its sales volume slide by about 9.2%.

Chongqing Brewery, a unit of the Danish beer giant Carlsberg group, also saw its sales volume shrink. It also posted a net loss of 65 million yuan ($10 million) due to a one-time charge associated with the closure of a factory, compared with a net profit of 73.43 million yuan the previous year.

Chinese brewers have had trouble adjusting to a beer market that is no longer expanding. During the heady days of growth, brewers make a profit despite low sales margins. A shrinking market calls for a new business model.

While Chinese brewers flounder, AB InBev, which has the third-largest slice of the Chinese market, is delivering solid results. The huge Belgian brewer has pulled in young drinkers with its American brand Budweiser, which is positioned as a premium product in China. It has also attracted older consumers with its cheaper Harbin beer. Its sales volume was up 0.4% from a year earlier, while sales revenue jumped about 10%.

AB InBev bought U.K.-based SABMiller late last year. As a result of the deal, the joint venture between SABMiller and China Resources Beer was terminated. AB InBev is expected to start selling SABMiller’s products in China as well. With AB InBev gaining momentum, some market watchers predict AB InBev, which raised its market share about 16% in 2015, may overtake Tsingtao within a few years. Its market share is forecast to reach about 18% by that time.

Despite the recent pullback, China is expected to remain the world’s largest beer market, downing around a quarter of the beer consumed worldwide. To catch up with AB InBev, Chinese brewers will need to slash excess capacity and workers, as well as develop products to satisfy changing tastes.