With growing calls for a ban on liquor, political parties have pledged to follow through, but it may not be so simple

Waves of heat radiate from the pavement in front of the Amma Canteen in Chetpet where large vats of spicy sambar rice are being prepared in the subsidized kitchen named after Tamil Nadu’s chief minister. 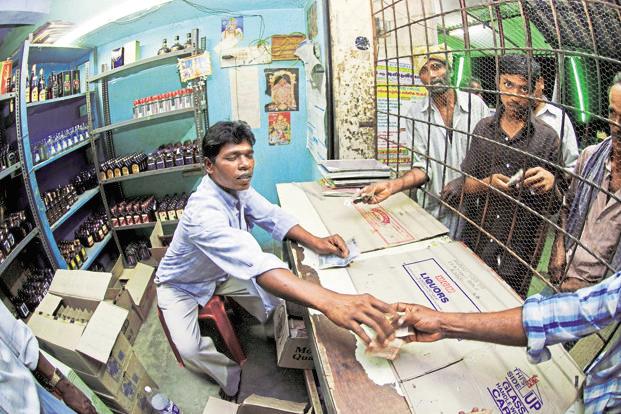 A few people have gathered outside, watching their lunch being cooked, which will be sold to them for as little as Rs.1 per helping of idli.

Arun, a sewer cleaner, is one of them, “I do drink,” he says. “My work is physically strenuous and alcohol helps me deal with the stress.”

His access to liquor may soon be curtailed, and eventually cut.

Tamil Nadu goes to the polls on Monday and whatever the result, one thing looks probable—some form of a ban on the sale of alcohol may soon follow. Leaders of all major political parties are committed to the measure.

“Prohibition will be enforced in a phased manner, which will eventually lead to complete prohibition,” chief minister J. Jayalalithaa had told a massive crowd at the Island Grounds in Chennai at the launch of her election campaign on 9 April.

The election manifesto of the opposition Dravida Munnetra Kazhagam (DMK), launched the next day, also has a prohibition pledge. In fact, the party plans to go one step further: “I won’t say we will enforce prohibition in stages. We will just do it,” declared party chief M. Karunanidhi.

Both parties claim the measure will help households save money and families safeguard a healthy future.

But implementing that pledge, and convincing sceptics in the electorate, will not be quite so straightforward, and the cost to the state’s exchequer would be substantial.

It was, for instance, a Karunanidhi-led DMK government that first relaxed the dry law in 1971 implemented partially in 1937 by a Congress government, a fact pointed out repeatedly by both Vaiko—general secretary of the Marumalarchi Dravida Munnetra Kazhagam (MDMK)—and ruling All India Anna Dravida Munnetra Kazhagam (AIADMK) chief Jayalalithaa during their election campaigns.

Although he likes to settle down with a couple of pegs after a day of back-breaking work, Arun admits that a move towards prohibition may actually turn out to be beneficial for him. “If they close the liquor shops, I won’t have an option and will stop drinking. It will save me and my family money,” he says.

The state of Tamil Nadu, on the other hand, will end up losing money—a lot of it—if prohibition is enforced. More than 30% of the state’s revenue comes from liquor sales—the business of selling alcohol in the state is entirely run by the government.

The Tamil Nadu State Marketing Corporation, or Tasmac, owned by the state government has exclusive rights of selling wholesale and retail alcoholic beverages in Tamil Nadu, and generates over Rs.25,000 crore of annual revenue.

Last year, revenue earned from liquor sales in the 6,800-plus liquor shops that Tasmac runs across the state stood at Rs.26,188 crore. “It is expected to reach Rs.29,672 crore in 2015-16,” state finance secretary K. Shanmugam was quoted as saying byThe New Indian Express in March last year. He said thatRs.22,375 crore will come from commercial tax and anotherRs.7,296 crore from excise duty.

In a state that has a budget deficit of over Rs.9,000 crore, an alcohol ban will have far-reaching consequences.

Dry laws in varying degrees are in force in several states like Gujarat and Bihar. And every state has its own alcohol-free days. Not surprisingly, though, prohibition is controversial in Tamil Nadu.

In October last year, left-wing folk singer Kovan was arrested on charges of sedition when his songs Moodu Tasmac Moodu (Shut Down Tasmac) and Oorukku Oru Sarayam (Liquor for Every Village) were alleged to be defamatory in nature because they were critical of Jayalalithaa.

That hasn’t stopped him from singing.

The 45-year-old singer, who uses folk music and street theatre to drive home social messages and mobilize communities, has recently come up with yet another anti-Tasmac song.

Amma Bongu (Amma’s Foul Play), his latest, which takes a dig at what it perceives to be a hypocritical attempt at prohibition, has gone viral.

The issue has drawn many other protesters too.

In July last year, Sasi Perumal, 59, died while protesting on top of a mobile tower urging the government to move Tasmac liquor shops from areas close to educational institutions and places of worship. Perumal’s protest turned out to be a catalyst of sorts in the anti-alcohol movement that is sweeping the state and galvanised students.

Then there were the pro-prohibition protests launched by the late Mariammal, MDMK leader Vaiko’s 94-year-old mother who led hundreds of women in protest at their village Kalingapati in Tirunelveli in August.

According to Senthil Arumugam of the Satta Panchayat Iyakkam, a non-governmental organization that is strident in its demand for a liquor ban, alcoholic drinks have been one of the reasons for the physical as well as mental abuse of women and children, especially those from poorer families. “All these are the repercussions of liquor and its addiction,” he says.

Saranya, 22, from Melpakkam village in Tindivanam, agrees: “My husband is a construction worker and he drinks quite often. Despite telling him that it will spoil his health and affect our children, he still drinks.”

“I want to give my children a proper education and this can happen only if the liquor shops are closed. Otherwise, it is going to slowly kill my family,” she adds.

The politics of liquor

That’s easier said than done, as a visit to a Tasmac shop any evening shows.

Water is spattered on the grimy floor outside the Tasmac store on Anna Salai, Chennai. Old newspapers, plastic wrappers and remains of food float in it. It is around 6.00pm and a few regulars have already settled in, hunched over transparent plastic cups filled with amber liquid in attached bars.

Behind the cage-like grills of the store’s front door, a common sight across India, Shankaran at the counter is a busy man. “We get around 500 customers a day, at least and make around Rs.1 lakh or so,” he says.

Ganesan, who also works in the store and earns aroundRs.400 day, has been working here for five years. “I worked at another Tasmac shop before,” he says, but refrains from commenting on what he thinks of the movement for prohibition.

Uncertainty looms for the 28,000-odd Tasmac employees across the state. While Jayalalithaa has spoken about reducing working hours, closing down outlets in phases and opening rehabilitation centres, the DMK has promised alternative jobs for Tasmac workers and de-addiction facilities.

“If the centre imposes a liquor ban across the country, Tamil Nadu will be the first to welcome it. But, right now this is not possible, prohibition is impractical,” he told the legislature earlier this year.

Going by the record of previous attempts to enforce prohibition in Tamil Nadu, he may be right.

A total prohibition imposed by the DMK in 1974, led to a number of deaths over the next two years due to the consumption of illicit hooch. The ban was lifted in 1981 and alcohol was sold until 1987.

A subsequent ban led to a large number of “hooch tragedies” between 1988 and 1990, when people desperate for a drink bought liquor on the black market that was adulterated with methanol, a highly poisonous chemical.

There was a pattern: a ban on alcohol, and its lifting, accompanied by frequent deaths from illicit liquor.

After a particularly serious tragedy in 2001 when over 100 people died after drinking methanol-laced alcohol, things changed. In 2003, the AIADMK government amended the Tamil Nadu Prohibition Act, 1937, and Tasmac, which was functioning as a wholesale trader became the exclusive retail vendor of alcohol in the state.

Liquor shops were brought under Tasmac control and, by 2004, all private shops selling alcohol were either shut down or taken over by the state-owned corporation.

This policy has continued till date. Today, Tasmac is a monopoly, and a powerful one at that.

There are 19 distilleries that supply to Tasmac, the largest of which is Midas Golden Distilleries Pvt. Ltd, owned by Jayalalithaa’s close associate V.K. Sasikala and her family.

According to data published by Tamil weekly Ananda Vikatan, Tasmac has procured supplies worth Rs.5,404.88 crore from Midas.

It’s not all one-sided. Golden Vats, one of the larger suppliers to Tasmac during the previous DMK regime, is owned by close associates of former Union minister and DMK member T.R. Balu.

For all this, for the first time in Tamil Nadu, “prohibition has become the prime electoral issue”, says Arumugam.

The stage is set at the R.K. Nagar constituency in North Chennai, where the chief minister is filing her nomination from this year. A troupe of dancers sway to film songs blaring from a loudspeakers, entertaining the large crowd of people who have gathered here, waiting for a glimpse of Jayalalithaa.

The AIADMK chief’s convoy arrives at dusk. From inside her vehicle, Amma begins her speech. She reiterates the key points of the party’s manifesto, released the previous day, stressing on the need for prohibition in the state: “I’m for you. I’m because of you. I promise that I will bring prohibition in a step-by-step manner.”

Fifteen minutes later, her convoy moves on and the crowd melts away.

Within a matter of minutes, the nearest Tasmac store in R.K. Nagar has burst into life. Drinkers throng it and, for the moment, the next government seems a while away.