Tamil Nadu may soon become the latest Indian state to impose a complete ban on the sale and consumption of alcohol, writes the BBC’s Geeta Pandey in Chennai. 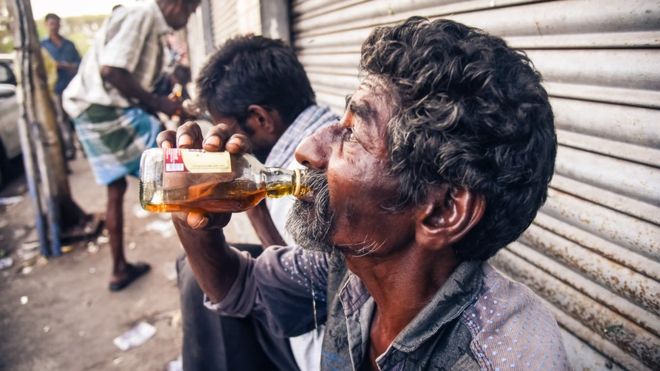 It’s early evening and as the hot sun begins to fade on a particularly hot and humid summer day, a constant stream of buyers begins to troop into liquor shops dotting a busy commercial area in the north of the city.

Most buy small bottles of whiskey, crank them open right there and drink up, throwing empty bottles and plastic cups on the nearby pavements or streets.

The first Tasmac store was set up in 1983 – in just over three decades, their numbers have risen to over 6,800 and locals say every single village in the state has one within walking distance.

But campaigners say this ease of accessibility has fuelled massive alcohol addiction in the state with nearly 10 million addicts.

According to the government’s own admission, more than seven million people in the state drink daily.

Tasmac stores are everywhere, near schools, near churches and temples and near hospitals, he says.

“Major crimes and accidents are fuelled by alcohol, it is also leading to cases of sexual harassment of women and robberies. Alcohol abuse is also the reason why the state has the largest number of widows under 30 years of age,” he says.

A group of women flower sellers in Rattan Bazar area say they support prohibition because their husbands spend all their daily earnings on alcohol.

Among them is V Bharathi, a 40-year-old mother of two girls.

In their election manifesto, the DMK said it would halt sales in one fell swoop, the AIADMK announced it would introduce the ban in “a phased manner“.

Voting was held on Monday and counting is due on Thursday, but all exit polls are already predicting a victory for the DMK and it’s being suggested that the alcohol ban may have had something to do with the DMK’s fortunes.

However, this is not the first time the state is considering prohibition – it was first introduced in Salem district in 1937 and later expanded to cover the entire state.

That, analysts say, is because alcohol sales fetch the state exchequer billions of rupees annually in sales tax and excise duty – this year, the earnings are pegged at 300bn rupees ($4.5bn; £3bn) – and no government is happy to forego this considerable sum of money.

Campaigner, however, point out that prohibition has been successful in several other states.

In April, the eastern state of Bihar announced a complete ban on the sale and consumption of alcohol.

Reports coming out of the state, however, suggest that the ban has just pushed the alcohol trade underground, and that illegal sales are rampant.

There are also reports that many have been travelling to alcohol shops in border districts in the neighbouring states of Uttar Pradesh and Jharkhand to buy alcohol.

Mr Raju, however, believes that shutting down Tasmac shops will go a long way in curbing alcoholism in the state.

“It is the government’s moral responsibility to bring in prohibition. Making it harder for people to buy alcohol will definitely help.

“Can students and women go to Andhra Pradesh every day?”