Tennent’s is to be distributed across China after owner C&C Group agreed a strategic partnership with Beijing-based import business Vandergeeten.

Joris Brams, Managing Director of C&C Group’s International Division, said the company saw the deal as part of a long-term growth plan for the Tennent’s brand. 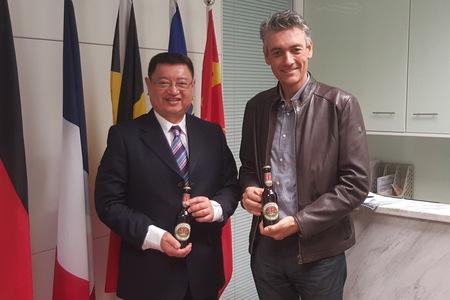 “This is a fantastic opportunity for C&C Group to work in partnership with a well-established company in China with a very strong reputation in the drinks business,” he said.

The deal is the fourth such partnership C&C Group has signed for Tennent’s in recent months. Last week it revealed Scotland’s top selling beer brand would be brewed in India in a deal with Mahou San Miguel.

Vandergeeten began importing from Belgium and Western Europe in 1994 and now has more than 90 brands in its portfolio, making it one of the most active distributors of specialty beer in China.

Yu Xiaoning, chief executive officer of Vandergeeten, said: “Working with C&C is an exciting opportunity for us to even further diversify our wide range of premium European beers. We’re confident that in cooperation with C&C, we can develop Tennent’s into a popular and successful brand enjoyed by customers all throughout the country.”

To achieve nationwide distribution for its range, Vandergeeten said it had offices in Beijing, Shanghai, Guangzhou and Shenzhen, as well as regional representatives and sub-distributors covering all of China.

C&C’s strategy for growing the Tennent’s brand internationally comes as global alcohol consumption fell for the first time this century. Euromonitor International recently reported that alcohol in China declined by 3.5 per cent because of a heavily-reported clampdown on extravagance.

However, imported beer into China continues to grow, said Mr Brams. “The market for imported premium beers in China has enjoyed stellar growth over the last five years and this partnership with Vandergeeten will ensure that the Tennent’s brand portfolio is well positioned for long term growth in China.”

Encouragingly though, the group saw volume growth in the potentially lucrative Asian market rocket by 66 per cent. Currently, just ten per cent of Tennent’s is sold outside of the Scottish market.

C&C Group chief executive Stephen Glancey said that although the export market for Scottish alcohol was dominated by whisky, there was increased demand for Scottish beer brands.

“The desire for authentic high quality Scottish brands travels across the alcohol space and we are seeing increased potential for the Tennent’s brand in new markets. Tennent’s has a good franchise because of the red ‘T’ and it’s been around historically, and Scotland is well respected for its food and drink,” he said.