Over 500 residents of Pushpa Nagar in Nungambakkam staged a protest in front of a Tamil Nadu State Marketing Corporation (Tasmac) shop in their locality demanding its closure as it was located in a residential area. Even school boys were taking to liquor, they said. 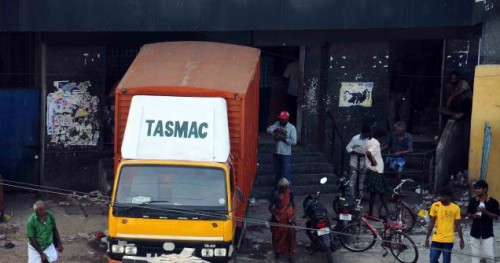 “There are over 4,000 families in Pushpa Nagar on Tank Bund Road. The Tasmac shop (number 494) has been in the locality for the past many years. Fights break out among the customers and the women in the area are also subjected to eve-teasing,” says ‘Karate’ Selvam, a resident and member of the Congress party.

Anbu, a resident of the locality, said that even schoolchildren consumed liquor in the shop. “Some children from government schools come to the shop in the morning to buy alcohol. Many teenagers from the locality have become addicted to liquor due to the presence of the shop,” he said.

“A few years ago, some police officers had written to senior officers about the inconvenience the shop was causing to the people. No steps have been taken to shut it down. After getting drunk, the men tease women coming to the nearby grocery shop,” Selvam says.

With the government announcing the closure of 500 shops initially as it embarks on a phased prohibition, public demand for closure of liquor shops in residential areas and transport hubs has started cropping up.

“The Tasmac shop near the Mylapore MRTS railway station is a big problem for commuters. Drunkards sleep on the platforms here. They also flock to the road , causing trouble for pedestrians,” says V. Bharat, a resident. Residents of Triplicane High Road, Raji Street and Sabapathi Street Junction in Nesapakkam and Valluvar Kottam High Road also demand closure of liquor shops. “On Anna Nagar 18 Main Road, residents are troubled as many come in cars and drink in public,” says a resident.