Gurgaon being a hub of microbreweries, attracts a major chunk of NCR’s craft beer lovers. And these beer lovers have preferences of their own. Some like it light, while there are others who prefer a stronger flavour. A chat with some of the brewmasters in the microbreweries in the city will tell you that each type of beer, be it wheat, lager or dark, is preferred by a certain kind of drinker. To suit the taste of their customers, the brewers keep experimenting with the ingredients. Based on their observation, they tell us who in Gurgaon likes to guzzle what kind of beer.

Boys like it light while men drink dark beer 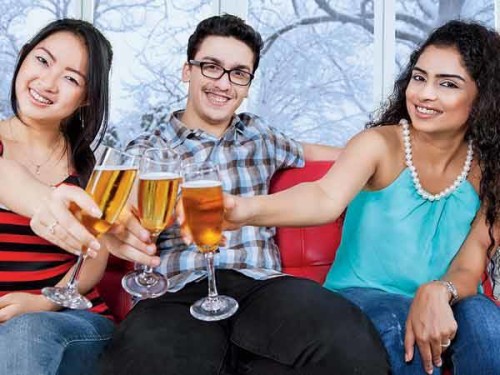 Sagar A Powale, head brewer at 7 Degrees Brauhaus , tells us, “In Gurgaon, youngsters like light beer like wheat and lager. They wish to drink more and spend more time chatting over beer, so they go for the light ones. Men between 35 and 45 years of age, however, like to have dark beer. But most men above 45 do not like beer at all. They stick to scotch and whiskey.”

Ishan Grover, a freelance brew master who has helped to set up about ten microbreweries in Gurgaon, says, “Sixty per cent of men in Gurgaon like wheat beer irrespective of age, while the rest 40% like dark beer which is very strong. From the latter group, men come to me and say, ‘Yaar kuch thunderbolt (extremely strong) jaisa pila de’.”

Tejinder Kumar, head brewer, Striker Group, agrees with both Sagar and Ishan. “Gurgaon loves beer. On weekends, a decent microbrewery in the city sells about 800 litres of beer. Young men go for wheat and light beer while older men like dark beer which has more alcohol content.”

Sagar says women in Gurgaon like pilsner beer, which is lighter than lager because they don’t like anything ‘kadwa’. Ishan says, “While both Indian men and women like wheat beer, there is still a difference. Men like German wheat beer which has the taste of banana and clove, but women like Belgian wheat beer which gives the flavour of orange, coriander and oatmeal.”

Rohit Raj, head brewer, Open Tap, adds, “Women like light beer and they drink their light beer more than the men, because after having a few mugs of beer, men want to switch to something else.” Tijender adds, “The cider beer, also called the khatta meetha, is a favourite among the women here.”

Gurgaon has a huge expat community and brewers sweat out a lot trying to satisfy their foreign customers’ taste buds. All the brewers unanimously tell us that Europeans and Americans like dark beer, while Asians are likely to go for lighter beers. Rohit says, “I have tried serving dark beer which tastes a little bitter to Indian men, but it has not been very successful.”

Sagar explains, “It is because of the climate they are accustomed to. Europeans and North Americans grow up in wintery weather, so they like strong, dark beer. Since Asians live in hot and humid conditions, they like light beer which they can drink more and stay hydrated. The South-East Asians, Japanese and Koreans like extremely light beer which has very little alcohol content. Australians and New Zealanders like lager.” He adds, “Indians like wheat beer because it has a fruity aroma and Indians have a sweet palate. Agar unko lassi type beer mil jaaye toh best hai. That’s why Indians like sweet tea compared to bitter coffee.”

Nothing Kadwa: Women like pilsner beer, which is lighter than lager.