Witlinger craft beer positions itself as a brand associated with The Adventurer personality with the tag, “Fearless. Daring. Spontaneous. First to try”. Since that description fits me to “T”, the beer already had my attention before I had even taken a sip. While Witlinger has been available in India as a draft beer since April 2014, the event I attended at the British High Commission was its launch in bottles for the retail market. 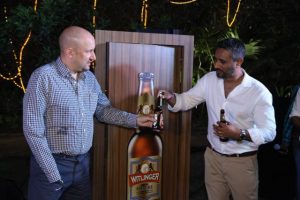 So a balmy summer afternoon on the lawns of the bungalow of the Director for UK Trade and Investment within the British High Commission compound proved to be the ideal occasion for the launch. I found the Witlinger wheat ale to be crisp and fresh with an interesting fruity aftertaste. According to Anuj Kushwah, the MD of Kaama Impex the importer company, that special tangy flavour comes from freshly crushed coriander seeds and sweet orange peel which are added to the brew to give it a distinctive citrus aroma and taste.

The beer is brewed with wheat malt and using traditional ale yeast by master brewers at Bains Brewery in Cardiff drawing on 130 years of brewing experience and knowledge. Currently the entire output of Witlinger (which includes both ale and lager) is directed to the Indian market, a total of 150,000 cases which is expected to grow to 500,000 cases by next year. Witlinger has set itself an ambitious target of capturing 30% of the imported premium beer market in India.

The word that comes to mind when quaffing Witlinger wheat ale (with its low alcohol content 4.6% and its fruity flavours) is round-the-clock easy drinking and the gathered crowd was certainly putting that to the test! There were plenty of canapés on offer from mini-sliders to classic British fish-and-chips and, as I remarked to our host, St. John Gould, he certainly knew how to throw a party. As people gravitated towards the dance floor the middling band from the Northeast belted out some old favourites from ABBA and Credence Clearwater Revival before it all began to wind down at about 11 pm.

Witlinger beer has been available on tap at places like the Beer Café and the Town House. The bottle is modelled on a traditional Belgium beer bottle and features bottle neck labels in golden colour. With the new retail launch, beer-lovers in Delhi and Mumbai will be able to lay their hands on the bottles at a price of Rs 150-160 which is reasonable for a premium beer brand.