The Punjab and Haryana High Court today declared invalid a provision in the Punjab excise policy of 2016-17 for allotment of licence under a new category, L-1A, to entities that only were allowed to buy liquor directly from breweries and distilleries. 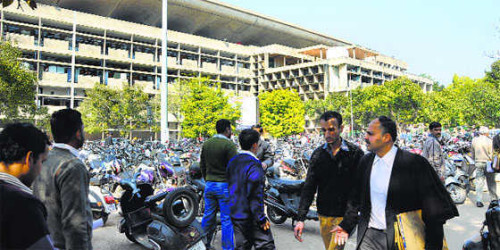 The petitioner’s case was that the new L-1A licence was created just to monopolise liquor trade in Punjab.

A Division Bench of Justices Ajay Kumar Mittal and Raj Rahul Garg held the provision to be invalid and inoperative to the extent that it did not prescribe the manner and method for issuance of the consent letter by the manufacturers or the distilleries. At the same time, the Bench made it clear that the state was empowered to incorporate under-challenge sub-clause (ii) of clause 2.14 in the policy.

The ruling came on a petition filed by Amarjit Singh Sidhu, contending that according to sub-clause (ii), a manufacturing company could not issue consent letter to more than one entity. But parameters for the manufacturers to issue consent letter were not laid down in the entire policy. Even the criteria for cancellation of consent or authority letter issued by the manufacturing unit are not mentioned in the policy.

Dubbing the groups major stakeholders in the liquor business in Punjab, the petitioner’s counsels said these were instrumental in influencing the excise department for creating the new category of L-1A licence for their own economic interest.

The Bench ruled that the state was empowered to frame policy for liquor sale and the courts “shall be loathed for interfering unless it was shown to be discriminatory or arbitrary”.

The creation of L-1A category between the distilleries and wholesale L-1 licencee to augment revenue and stop leakage, as such, could not be termed arbitrary. The Bench said that sub clause (ii), however, did not prescribe the manner or method for the distillery or the competent authority to issue the letter. “It does not satisfy the requirement of being transparent, objective and giving level-playing field to all applicants. The procedure does not eliminate the vices of unfairness, unreasonableness, discrimination, non-transparency, favouritism or nepotism in the award of authority/consent letter to an applicant,” it said.

The Bench concluded it would be open to respondent-authorities to make appropriate amendment and prescribe necessary guidelines to manufacturers/distilleries for issuing letters to eligible applicants by draw of lots, auction or other mode providing equal opportunities in a transparent and objective manner.

The respondents could also retain such right with the authority concerned, if so required.

“If after taking corrective measures and inviting fresh applications, no fresh offer or application comes forth, the allotments, if any, already made shall continue for the rest of the period,” it added.