Investors are betting on Chinese breweries to score big, riding on the one-month UEFA European Football Championship, market commentators said.
“No beer, no football” and “Watch football, drink beer” are slogans used in advertisements that have already been seen everywhere in China, which boasts the world’s largest audience for the world biggest game. The one-month event will kick off in France starting Saturday Hong Kong time, with 24 national teams from around Europe competing to reach the final at the Stade de France in Paris. 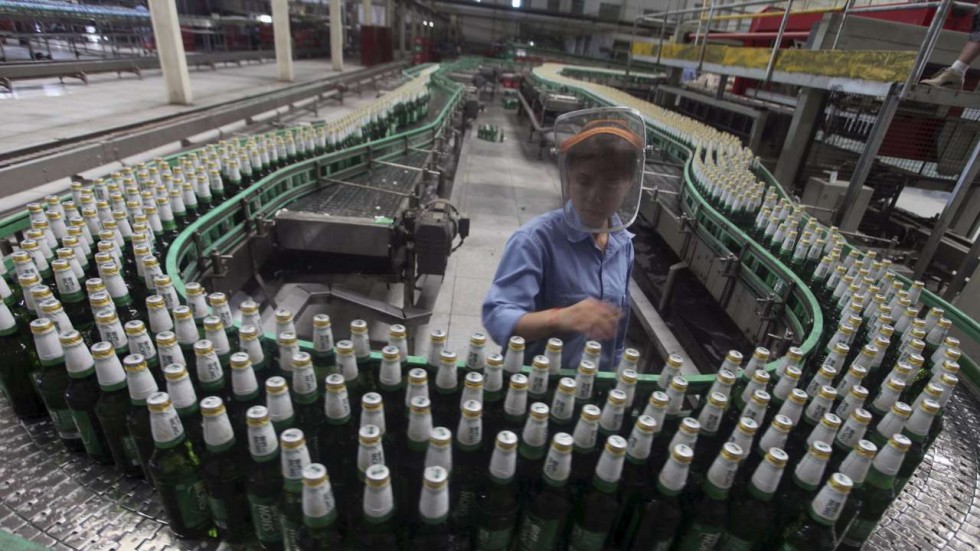 “Breweries usually see their beer sales increase in the traditional peak season from June to August, not to mention during the European Championship,” Hanna Li Wai-han, a strategist at UOB Kay Hian Hong Kong said. “Speculators will certainly see the great football tournament as a new casino on expectation of a rally in breweries.”
Shares of the major breweries listed in Hong Kong jumped recently, with China Resources and Tingtao Brewery Company both gaining more than 6 per cent over the past fortnight.
“I think speculation on the European Championship is the main driver for their recent rise,” said Li. “And you may see a continuing but small gain for Chinese breweries in the coming month.”
Victor Au, chief operating officer at Delta Asia Securities, agreed, saying that the recent rise in breweries’ shares is heavily based on the “football tournament” speculation.
Au said the decline in raw material costs is also a contributing factor to the improvement of Chinese breweries’ business. Tsingtao increased its earning at 2.47 per cent year on year in the first quarter of 2016, mainly driven by lower raw material costs.
However, the top four players in China’s brewery industry, including CRB, Tsingtao, AB InBev and Yanjing, all reported flat or declining sales volumes in the first quarter of 2016, indicating market demand is still sluggish.
Data from the National Bureau of Statistics shows China’s beer market continued to decline. The full-year output of the industry was 471.6 million hectolitres (hl) in 2015, down 5.1 per cent from the prior year, and a trend that showed negative growth for two consecutive years.
Li from UOB Kay Hian warned the rally may retreat after the football games are finished, with the brewery business expected to move towards polarisation.
“The giants, with the bigger market shares in China’s brewery industry, will further dominate, contributing to product mix upgrades,” Li said. “The small brewers are likely to continue losing their market share due to more intense competition.”
The competition is fierce in China’s brewery sector, she added. Players in the lower-and-middle priced market segment are facing pressure from the giant domestic beer makers, while premium brands compete with foreign breweries, she added.
Sun Mingbo, the chairman of Tsingtao Brewery, said competition in the industry will be fiercer following moves by foreign players to increase their investment in China.
“The rapid development of surrogate products including imported beer [and] ready-to-drink (RTD) will take away some share in the domestic beer market,” said Sun a statement.
Daiwa Capital analyst Anson Chan said shifts in market share are now an important indicator of the upside for long-term operating margins. “Foreign brands are better positioned in the beer segment due to young customers’ preference to consume these types of beers,” Chan said in a report.
With intensive competition and sluggish demand, China’s brewery sector will see more mergers and acquisitions (M&As), he said. “Most domestic beer players have a strong cash balance and are looking for M&A targets. M&A remains the major swing factor for China’s brewery sector.”
However, Chan said he sees no meaningful M&A targets outside of the top five players that could stimulate volume growth because the other breweries have weak brand recognition nationwide.
Au from Delta Asia Securities agreed, saying that most industry majors are looking for M&A targets, but they have not seen many such opportunities in China’s brewery sector so far.
However, Au said he expects that the possible deal between China Resources and fast food giant McDonald’s will boost the business of China Resources Beer.
McDonald’s is targeting private equity firms, including Bain Capital, MBK Partners, TPG Capital Management and Chinese state-backed conglomerate China Resources, for its planned sale of 2,800 restaurants in North Asia, according to Reuter’s report.
China Resources Beer is the Hong Kong listed subsidiary of China Resources. Chen Lang, chairman of China Resources Beer, said in a statement that the company will “explore synergies from mergers and acquisitions”.