The closure of 500 shops seems to have had a marginal impact on the overall liquor sales. In places like Chennai, there are plenty of access points. This is not the case in places like Madurai. 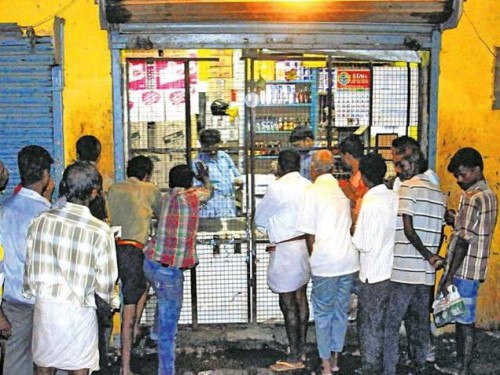 A reduction in revenues of about Rs. 3.28 crore per day has been recorded about three weeks after TASMAC pulled down the shutters of 500 of its shops across the State.

A source in TASMAC said, “Closure of shops and lowering operating hours (to 10 hours from 12 hours) have had the desired effect and sales have dropped slightly.” The source did not want to disclose the number of cases that were being sold in the market.

Estimates indicate that on an average, TASMAC sells liquor worth Rs. 67-70 crore a day across its outlets in the State.

An analysis shows that shops which were closed in and around villages have helped reduce sales. Shops that were closed in Madurai zone, which comprises Dindugal, Virudhunagar, Ramnad and Tuticorin, showed a major impact. A manager of a TASMAC outlet near Madurai, who wished anonymity, said, “In places like Chennai and Coimbatore, it is easy to access liquor shops. If one shop is closed, one can go to another one located close by. In Madurai zone, the case is entirely different and access points are far apart,” he added.

Around 201 shops were closed down in the first phase in Madurai. Similar was the case in Trichy.

The closure of certain outlets and the restriction on working hours have opened up an illegal liquor market across many places, some activists claim. “In some of the outlets, liquor is stocked outside, behind the shops, and sales begins at 10 am itself, not at noon. In some cases, the shops are open late into the night or salesmen keep the stock aside and sell it later,” said a manager who works in an outlet in T Nagar. In Anna Nagar, some shops reportedly keep the doors half open so that tipplers can crawl in and purchase liquor.

D.Dhanasekaran, general secretary of the AITUC-affiliated Tamil Nadu TASMAC Employees’ Union, confirms this phenomenon: “There are places where liquor is being sold illegally. This should be curbed.”

A TASMAC employee who is posted at an outlet in Anna Salai, said, “TASMAC outlets are serving liquor even after operating hours at the bars which are attached to them.”