VietNamNet Bridge – Officials of the Ministry of Industry and Trade (MOIT) have said that the State will either own less than 50% of charter capital or withdraw all capital from two giant beverage corporations Sabeco and Habeco. 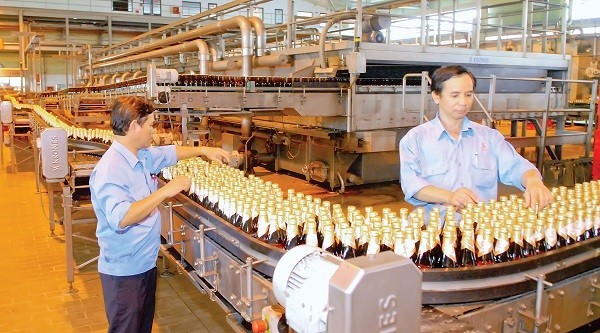 Speaking at a conference reviewing operations and results in the first half of 2016 of the MOIT and its subsidiaries on Tuesday, July 12, Minister Tran Tuan Anh said that the Saigon Beverage Corporation (Sabeco) and Hanoi Beverage Corporation (Habeco) were building a plan on the entire divestment of state capital.
“The divestment will be carried out on the principle that the state holds less than 50% of charter capital or no capital at all,”Minister Tuan Anh said.
The MOIT will assess the state divestment plan and implement it under the direction of Prime Minister Nguyen Xuan on the further sale of state stakes in the two giant beverage corporations.
The sales of state stakes in Sabeco and Habeco has been a hot issue since the Vietnam Association of Financial Investors (VAFI) sent an official letter to the Minister of Industry and Trade and the Managing Boards of Sabeco and Habeco to urge withdrawal of entire state capital from the corporations and the listing of these firms’ shares on the stock market.
In mid-2015, the MOIT submitted a report to the Government on the sale of the state’s stake in Sabeco, with two plans: (1) reduce the state ownership from 89.59% to 36% once through public auction and (2) sell the state’s stake in Sabeco twice, with 40% the first time and 13.59% the second time.
Many Vietnamese and foreign investors expressed their interest in becoming a strategic shareholder of Sabeco.
The MOIT then proposed to implement the plan 1.
At the 2016 shareholders’ meeting of Sabeco, held on May 27, Sabeco Chairman Vu Thanh Ha said Sabeco leaders were well aware that the sale of state stakes at Sabeco would help the corporation have capital and improve its operational efficiency.
This proposal is currently being considered by the Ministry of Planning and Investment and the Ministry of Finance.
Sabeco is the biggest Vietnamese beer maker, with a 46 percent market share, equivalent to 1.3 billion litres. Habeco is the second largest, with 637 million litres, according to the Euromonitor’s market report in 2014.
Sabeco is holding 100 percent of charter capital in three member businesses and long-term investments in 19 associated companies. It reported total sales of nearly VND29.8 trillion ($1.4 billion) and a pre-tax profit of VND3.672 trillion ($171.6 million) by the end of 2014.
Vietnam’s beer market has attracted more foreign investors, thanks to its growth prospects. Vietnamese people spent at least $3.1 billion on beer and consumed 3.14 billion litres in 2014, excluding imported beer.