Although Buddhist temperance and decades of economic stagnation had curbed beer demand in Myanmar, the booming Southeast Asian country is attracting a slew of foreign breweries with its exceptional growth prospects. 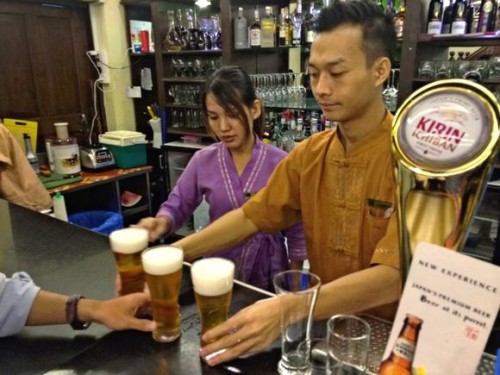 Japan’s Kirin Holdings and Dutch company Heineken are among those flocking to the market, which was opened after the democratization process began in 2011.

Affluent customers pour into Shan Yoe Yar, an upscale Yangon restaurant, nightly, escaping the humid, hot monsoon weather. The eatery started carrying Kirin’s Ichiban draft beer in June. A 31-year-old car dealership manager says he enjoys the beer with friends, noting the beverage’s smoothness. Kirin markets Ichiban as a premium 100% malt offering. Without promotional discounts, the beer is priced at 3,000 kyat ($2.53) per mug — double that of popular local offering Myanmar Beer, sold by Myanmar Brewery. But well-off people who like to try new things are interested, according to the restaurant’s manager.

In Myanmar, eateries are a major channel of beer sales, accounting for more than 80% of overall beer consumption in the country. The situation differs greatly from Kirin’s home market of Japan, where “drinking in” at home makes up about 70% of beer consumption.

Kirin Senior Executive Officer Takeshi Minakata, who oversees Myanmar Brewery as managing director, says the Myanmar unit will promote Kirin offerings as premium brands at restaurants. By working with wholesalers, the goal is to increase the number of eateries serving Ichiban from around 100 or so now to 150 by the end of the year.

In Myanmar, per-capita beer consumption is a mere one-tenth that in Thailand or Vietnam — at three to four liters yearly. The economic stagnation under the military regime and the stigma of women and youth drinking alcohol — based on Buddhist customs — kept a lid on demand for years.

But since the country began democratizing in 2011, demand has surged in urban areas. The market is expected to more than double from 2013 levels to around $700 million in 2018, according to research company Euromonitor.

In May of last year, Danish company Carlsberg launched production in Myanmar, and Heineken followed suit the following month. The Dutch company rolled out Myanmar exclusive brand Regal Seven, aiming to be the leader in premium brands. It plans to spend about $10 million this year to boost its Myanmar output capacity by about 40% to 45,000 kiloliters annually.
Kirin introduced its Black Shield Stout last fall after acquiring Myanmar Brewery. It also has rolled out the 100% malt craft beer Myanmar Premium.

It usually takes about a year to launch a new product. But Kirin halved the process by allocating managers with production expertise — including Minakata — to the project. “We now have a complete portfolio ready to compete in the market,” Minakata says.

With a market share of 70-80%, Myanmar Brewery has an overwhelming edge over Heineken and Carlsberg, who have shares of around 10%.

But in a rapidly growing market, the competitive landscape could change suddenly.

For Kirin, the battle is a nerve-racking one, especially after a slump in Brazil. The company shelled out about 300 billion yen ($2.97 billion at current rates) for the acquisition of Schincariol five years ago, only to see its market share tumble. Kirin had to write down the operations last year and is urgently trying to turn the business around.

“We can’t fail in Myanmar,” says a Kirin official in charge of group strategy.

With the Japanese beer market contracting since peaking in 1994, overseas expansion is a must. But Japanese beer brands generally lack global recognition — posing a challenge for homegrown breweries. Kirin took a 48% stake in Philippine brewer San Miguel in 2009, hoping to use its brands to propel Asian expansion.