The AIADMK government is serious about bringing in total liquor prohibition in the state and it will be done, assured chief minister J Jayalalithaa in the assembly. 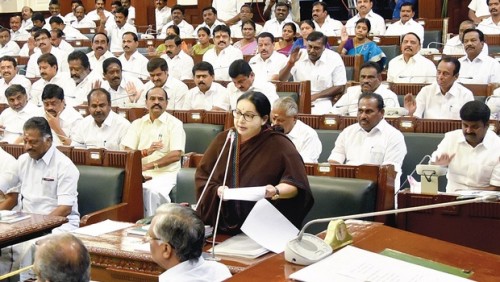 “It was in August 1971 that Karunanidhi lifted prohibition. All sorts of shops including those that sold arrack and toddy besides liquor made in India (IMFL) were opened,” said Jayalalithaa. Continuing her speech, Jayalalithaa said, in 2007, when members of several parties said in the Assembly that illicit liquor should be eradicated, the then chief minister Karunanidhi said “illicit liquor cannot be eradicated. If we (the state) have to compete with other countries we should produce more quality alcoholic beverages and through that alone we could win (situation). There is no other way out considering present day world culture.”

“This is the true opinion of Karunanidhi on prohibition. However, as far as I am concerned, I am firm on phased implementation of prohibition,” she said. The chief minister recalled the closure of 500 Tamil Nadu State Marketing Corporation (Tasmac) liquor outlets and reduced working hours of shops after she assumed office again this year.

Seeing the walkout, Jayalalithaa said: “Earlier, the assembly speaker used to summon marshals to get DMK MLAs thrown out of the hall, but now it is sufficient for us to say two words, prohibition and Katchatheevu.”

DMK challenged the ruling party for a debate on prohibition and Kachchatheevu issues.

“We are ready to discuss threadbare all the issues and history on prohibition and the island. But the speaker should allot time and at the end of the debate we will know who walks out of the assembly,” said Durai Murugan, speaking to presspersons outside the assembly.

He accused the speaker of not allowing them to speak in the assembly and said he wanted to recall the history of prohibition. “When Kalaignar (as Karunanidhi is called by his partymen) lifted the prohibition in 1971, everyone knew the financial position of the state. Even AIADMK founder M G Ramachandran (MGR) who was in charge of small savings department then supported Kalaignar’s decision. Within one year, the same government imposed prohibition and it was only MGR who lifted it in the state,” said Durai Murugan.

A few minutes later DMK MLAs returned to the assembly.