Breweries are popping up all over the city, and craft beer bars are taking up sizeable spaces in areas ranging from Kennedy Town to Ap Lei Chau. Not seen on this scale before, craft brewers are creating a new category of tenants for industrial as well as retail landlords. 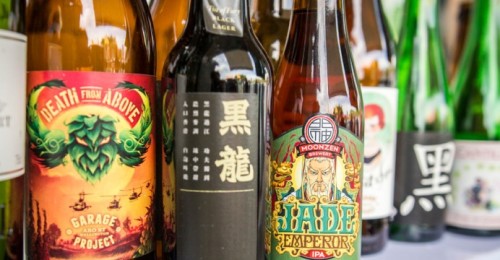 Craft beer is handcrafted and typically has smaller production runs than macro brewers, allowing for memorable beers with a distinctive palate. A local brewery might make just two million bottles a year. To put that into perspective, Carlsberg makes 35 billion bottles of beer a year.

“The market here is echoing what has happened in the States in the last 15 to 20 years,” says Joseph Gould, a founder of local craft offering Gweilo beer.

“There are many exclusive contracts for bars out there with the big boys, so the barrier for entry for small producers is quite high as you cannot offer the same financial backing as the industrial brewers do,” says Moonzen co-founder Laszlo Raphael.

Running a beer company also has a range of costs associated with it.

“I think it’s quite difficult to get set up; a brewery is a huge investment. Typically the dynamics of the market, and the leases people can get on locations, is very tricky. It takes a lot of capital investment, and you don’t get paid straight away. I wouldn’t advise people to run into it without doing their research,” says Gould from Gweilo, which does not its own brewery, but produces at Hong Kong Beer Co’s facility in Chai Wan.

The costs of producing craft beer depends on where your system comes from (US systems are more expensive than Chinese equipment), the size of a brewery, and modifications needed to make to the building. While set-up costs vary, industry estimates place expenses at HK$8-10 million to get started, even more for the most sophisticated systems. The time from concept to bar is anywhere from six months to two years.

“A barrier is the suitability of the building: Does it have the right sized lift? How do you get the tanks upstairs, and how is water and gas supply? These are things that are challenges that people have to overcome when planning to open a decent sized brewery,” says Wong.

Having the space to brew is a large fixed cost, not to mention storage, refrigeration, bottling, distribution, and marketing. Another barrier is finding suitable master brewers – who are akin to executive chefs – and they usually come from the US, UK, or Germany.

So why are craft beer pubs popping up from Mong Kok to Wan Chai and beyond?

Liam Lee, blogger at Facebook page “Beer meh Beer”, believes the average beer consumer in Hong Kong is expanding his taste, and this is reflected in the retail landscape.

“Instead of getting boring, artificial and tasteless commercial beers, people can select craft beers with different styles and alcohol levels,” says Lee.

Hong Kong craft beer producers often use locally found ingredients. Moonzen’s offerings include a “Yama Sichuan Porter” that is flavored with spices used in the region’s cuisine, while Young Master, based in Ap Lei Chau, has included mandarin orange peel in their beers.

“There are different flavors and stories behind each beer – sour, sweet, hoppy, fruity, roasted, chocolate-flavored and nutty,” says James Ling, general manager at Tap: The Ale Project in Mong Kok, just one of around 20 bars focused on serving craft beer in the city.

“There are an estimated 500 to 1,000 kinds of craft beers available in Hong Kong. People who try them will soon know that beers can be as complex and sophisticated as wines or liquors,” says Lee of Beer meh Beer.

But is this scene just a bubble waiting to burst? Insiders don’t think so.

“With craft beer taking up such a small area in Hong Kong, there is so much room to grow. It’s just about finding the right beer that the local market will have at the right price,” says Rob Whitaker, operations manager at Hong Kong Beer Co, which is based in Chai Wan.

It can be hard to push craft beers into local bars and restaurants because they are more expensive than commercial beers, but many owners are starting to change their ways.

“If I was to sell craft beer to a restaurant, the initial cost to the establishment may be more than a commercial brand. However, as craft beer is a premium product they can sell it at a higher price, which allows them to make more money,” says Whitaker.