The combined market value of three largest companies — United Spirits, United Breweries and Radico Khaitan — crashed 30 per cent to Rs 55,392 crore from a year ago.

Nearly a dozen listed liquor companies in India have lost almost $4 billion, or a third of their market capitalisation, over the past year as their shares fell following a consistent decline in sales growth, prohibition in few states and exclusion of the segment from the GST ambit.

The combined market value of three largest companies — United Spirits, United Breweries and Radico Khaitan — crashed 30 per cent to Rs 55,392 crore from a year ago.

During the same period, the benchmark index Sensex fell marginally by 0.6 per cent.

“Prices of liquor brands went up by over 20 per cent due to taxes since more than two years. Then there are many states that banned alcohol which is impacting the estimated growth of the industry,” said Aditya Joshi, consumer analyst with Nirmal Bang.

Since last year, Kerala, Bihar &Tamil Nadu that account for 20 per cent of India’s alcohol consumption, banned liquor either completely or in a phased manner. 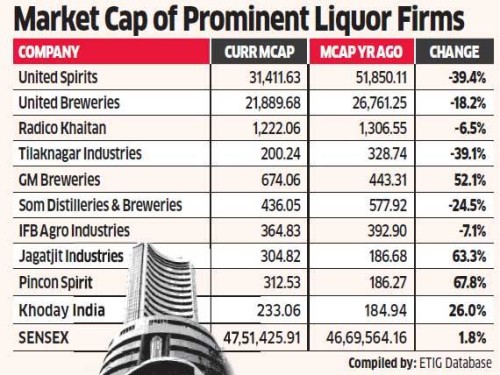 India is the second-largest spirits-consuming country behind China. However, India’s overall liquor consumption at 314 million cases grew less than a percent in 2015, compared with about 2 per cent a year ago, and more than 10 per cent between 2004 and 2014.

“We do not expect the regulatory environment to materially improve in the next two to three years and this will impede any broad improvement in operating profit margins for alcoholic beverage companies,” said a report by Moody’s.

While the long-term potential of India’s alcoholic beverage market is backed by strong growth prospects in the economy, rising disposable incomes and an increasing social acceptance of alcohol, profitability has been a problem. Taxes on alcohol, on an average, account for about 16 per cent of the overall tax revenues of state governments. In India, states levy taxes on alcohol, while the Centre levies duties on imports.

States control manufacturing, distribution and pricing of liquor. Moreover, the liquor segment has been kept out of GST, a big concern in terms of margins, said analysts.

The industry, however, is still hopeful.

“Post GST, alcohol will be the biggest direct source of revenue to a state compared to second largest now. States have been very possessive about this stream of revenue which is best reflected in the fact that they made sure alcohol was not included in GST,” said Amrit Kiran Singh, chairman at International Spirits & Wines Association of India that recently met Empowered Committee’s chairman to discuss the matter.