Indonesia is mulling a proposal to introduce a nationwide ban on alcohol, triggering uproar among holidaymakers and unsurprisingly, the island country’s tourism sector. 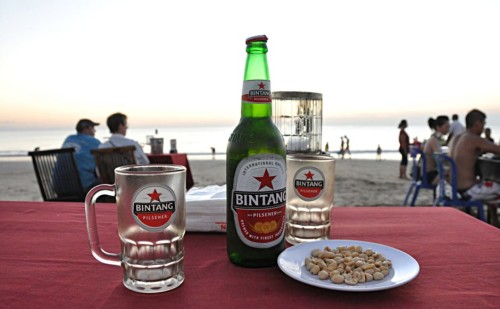 A bill seeking to prohibit the sale and distribution of booze, as well as the consumption of drinks with alcoholic content between one and 55 percent, was last year put forward by two Islamist parties – the United Development Party and the Prosperous Justice Party.

But a failure to achieve unanimity among legislators and concerns raised by affected stakeholders have left the proposal hanging, with the House of Representatives still debating the issue, according to reports.

If the ban in enforced, however, it may still include exemptions for travelers, customary activities, and religious rituals.

Outside of tourist-friendly cities and islands, the Muslim-majority country is generally conservative – alcohol is already banned in the province of Papua and the port city of Surabaya in Java.

While many attribute the proposal to Islamic hardliners, the ban proposal could well be the result of concerns over alcohol-related health problems and social ills.

“There’s a lot of people in Indonesia right now taking the view — and they might not be wrong — that if you look at the Western world, and what alcohol is doing to young people, we don’t want that in Indonesia and we want to ban alcohol,” he said.

The push for the ban was likely further fueled by the gang rape and murder of a 14-year-old schoolgirl from Bengkulu, Sumatra in April, which was perpetrated by 14 young males reportedly high on ‘tuak’ (palm wine).

If the bill is passed and enacted into law, Hindu-dominant Bali in particular would be the hardest hit – the resort island is a mainstay holiday destination for tourists looking to have fun on the cheap, and obviously booze is a major part of that.

Should alcohol be taken out of the equation, however, those reliant on visitors for their livelihood are worried that their main source of income will dry up.

Taylor added: “In Bali, especially, there’s a very strong feeling that it’s the last thing you’d want to do, because if tourists can’t have a beer or wine on the beach, the potential consequences for tourism are going to be very severe indeed.”

Speaking to the Jakarta Post, Indonesian Hotel and Restaurant Association (PHRI) head Hariyadi Sukamdani said: “If the bill is passed, our business will be done. The tourists, who mostly come from Europe, drink alcohol all the time. It will be very inconvenient for them if they can’t find alcohol.”

According to Hariyadi, even recent efforts to regulate the distribution of alcohol has had a negative impact on businesses, while foreigners have complained about how difficult it has become to find alcoholic drinks.

“No matter how beautiful the country is, if they can’t find alcohol, they won’t want to come here,” he said.

There are also those who predict that if the ban is implemented, it would only backfire and cause an increase in the demand and consumption of contraband booze, which could pose health risks.

Last year, after Indonesia prohibited the sale of alcohol at mini markets and small sundry shops, the country saw a 58 percent spike in illegal alcohol sales, including ‘oplosan’ (Indonesian bootleg liquor) and other home-brewed drinks, reported the Sydney Morning Herald.

Due to the lack of regulation in alcoholic content, this has led to an increase in cases of tourists dying or ending up hospitalized after drinking illegal alcohol laced with potentially lethal amounts of methanol.

A spokesperson for the Association of British Travel Agents (ABTA) warned that banning legal alcohol sales could have the “unintended effect” of exacerbating the problem of illegal alcohol consumption.

“Rather than banning alcohol entirely, the Indonesian authorities should continue to crack down on the sales of illegally distilled alcohol containing methanol, which has caused the deaths of a number of holidaymakers and local people over the years,” they said, as quoted by MailOnline Travel.

Liquor sellers have pleaded with the government to consider imposing tougher controls on the sale of alcohol rather than a blanket ban.

Leni, 50, a member of Communication Forum of Indonesia Alcohol Drinks Sellers, told the Jakarta Post: “I don’t mind regulations. But don’t apply a total ban because it will kill my business. If you want to regulate selling, I would be ready to comply.”

The nation’s beer sellers have also argued that the drink should be exempted from the ban, as it was not linked to poisoning cases.

Despite the apprehension caused by the proposal, there are those who believe that an outright nationwide ban would not be implemented.

“In my view, I think that nationally, the bill won’t get up. I don’t think in the Indonesian government there’s enough support for it,” said Taylor.

“Moderation is a better way to go because they need tourists to go to Indonesia and tourists having a glass of wine or a Bintang [Beer] won’t do any harm.”

However, he added that individual provinces with more uncompromising governments may go ahead with the ban.

In 2015, it was reported that up to 10.41 million tourists visited Indonesia.