Australian tourists in Bali said they would not continue to visit the holiday island if a mooted ban on alcohol was enforced.

And tourist and hotel operators have warned a booze ban would spell disaster for the island’s lucrative tourist industry.

But there is no suggestion the ban would be happening any time soon and most observers believe it will never make it into law in its current format.

Kenny Baker, from Nelson Bay, NSW, has been coming to Bali every year for the past 22 years. He said if alcohol is banned he won’t come back.

“It would not be Bali without a beer. It wouldn’t be the same,” Mr Baker said. “It is why I come to Bali, to have a beer and enjoy the beach and have a drink.”

Mr Baker said that Bali should be exempt from any alcohol ban because of the amount of tourists who visit. 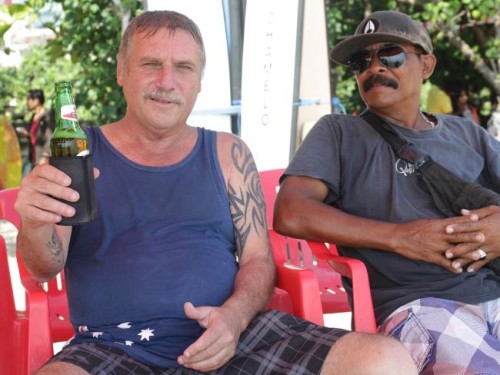 Paul Sage, from Newcastle, NSW, is on a three-month surfing holiday in Bali.

“It would be a silly law to do because a lot of tourists come here just to drink and party and the Indonesian government would be silly to bring in a bill like that because the Indonesians depend on tourists for money,” Mr Sage said.

He was among many tourists enjoying a beer and sunset on the beach at Kuta on Wednesday.

Sharon and Phil Shaw, from Melbourne, have visited Bali every year for the past five years.

Mr Shaw said that if alcohol was banned they would not come.

He said he and his family enjoyed relaxing with a drink on the beach or at dinner but were not heavy drinkers.

“We come here to relax, we work hard and we come to relax,” Mrs Shaw said.

They said the selling of alcohol in buckets should be stopped and age limits for alcohol sales should be enforced in a bid to cut down on the binge drinking that occurs.

“I think for Bali it (a ban) would be very sad because I think they would lose so much. I believe the Balinese rely on the tourists to survive,” Mrs Shaw said.

The Alcohol Prohibition Bill was first mooted in 2013, proposed by conservative Muslim political parties seeking to ban the production, distribution and consumption of alcohol across the sprawling island nation. 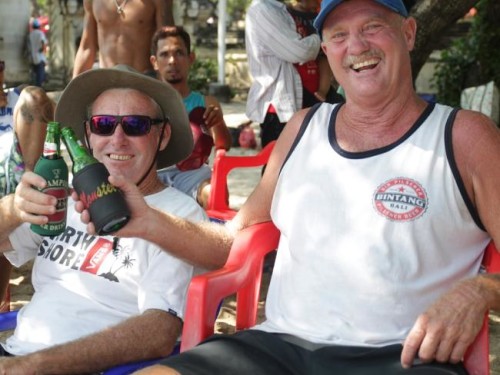 But the local tourist industry, along with the alcohol industry and unions, are opposed to any restrictions, especially in places like Bali, whose livelihood is garnered entirely from tourism.

The draft of the bill states that it is “to protect citizens from the negative impacts of alcoholic beverages, to raise awareness of the dangers of the beverages and to ensure order and peace in society, free from disturbances caused by consumers”.

However Indonesia’s Parliament is notoriously slow-moving and new legislation can take years to be drafted and enacted. Four years after it was first mooted the bill is yet to be debated or formulated.

The chairman of the Indonesian Hotel and Restaurant Association’s Bali chapter, Tjokorda Oka Arthana Ardana Sukawati, said his body was yet to be given full details about the draft bill.

He said it was impossible for Bali, as a top tourist destination, to stop the distribution of alcohol.

“If alcohol was banned, we in Bali reject it … we have a very high market for alcoholic beverages and most of our market is not local people, it is mostly foreign tourists,” Mr Sukawati said. 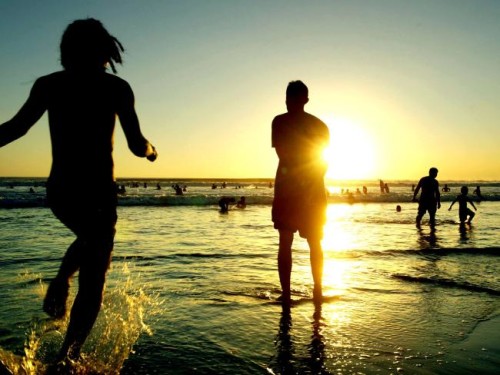 Mr Sukawati said the bootleg liquor, responsible for a spate of deaths across Indonesian villages earlier this year, should be banned.

Media relations chief at the Bsohe VVIP Club in Kuta, I Gusti Agung Bagus Sanjaya Putra, said any ban would ruin their income, as the club’s main revenue was from alcohol sales.

“Most of our customers are foreigners and alcoholic beverage is part of their culture and lifestyle. I am worried that they would not come to Bali anymore,” Mr Putra said.

Moves earlier this year to ban the sale of alcohol in minimarts and small shops, were not enforced in Bali.
The ban on sale of alcoholic drinks with one to five per cent alcoholic strength, was enacted by the Trade Ministry in April. But the Ministry decided to make an exemption in tourist areas and alcohol is still widely available in minimarts throughout Bali.

Any ban would be highly detrimental to the country’s tourist industry. More than 150 countries now have visa free access to Indonesia in a bid to lure more tourists and the industry believes that any gains from this would be negated by those who would not come if they could not drink.

Several provinces of Indonesia already ban alcohol, such as Aceh, which operates under a form of sharia law, bans any alcohol and those caught drinking can be caned.