Over the past two decades, China Resources Beer has become the largest player in the Chinese beer market by aggressively snapping up smaller targets. But on Friday, management declared that from now on, it will only pursue big acquisitions. 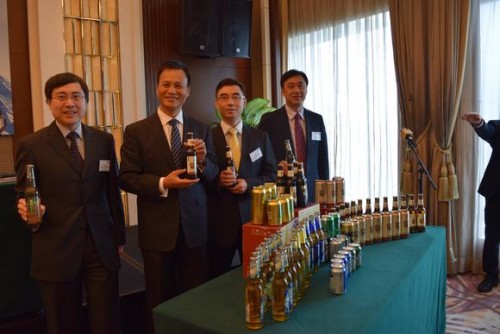 “We no longer pay attention to smaller players,” Chief Financial Officer Tomakin Lai Po-sing said at an earnings briefing. “What remains are the biggest players,” after a series of consolidation moves.

When the company waded into the mainland beer market with its Snow brand in 1994, there were two clear industry leaders — Tsingtao Brewery and Beijing Yanjing Brewery — and myriad local breweries scattered across the country. As overall beer demand surged, industry consolidation picked up, elevating Snow to the pinnacle by 2006. But even then, the top five players controlled less than half of the market.

Two domestic and two global players round out the quintet: Tsingtao, Yanjing, Anheuser-Busch InBev and Carlsberg. They would surely qualify as “big targets,” but large acquisitions naturally come with hefty price tags. Lai expressed confidence about the funding side of things as well.

In July, the company announced a rights issue to raise about 9.5 billion Hong Kong dollars ($1.23 billion). The main objective was to fund the purchase of SAB Miller’s 49% stake in a joint venture, to create a wholly owned subsidiary. Lai, however, explained that the move was also in preparation for “potential M&A opportunities.”

By limiting its borrowing, the company has kept its total loans outstanding at 4.53 billion yuan ($680 million) as of June. That is roughly on par with its cash and bank deposits, placing it in a virtual net-zero-debt position.

Banks seem keen to extend loans, probably, given the company’s healthy M&A appetite and relatively solid financial standing. Lai revealed that prior to the rights issue announcement, “many European and Japanese bankers came to our office every day asking to lend to us.” Some offered over HK$1 billion, he added without naming names.

“Of course, PRC (China) is the market that we are very familiar with,” Lai continued. But he also stressed a few times that China Resources Beer is “open and prepared for everything,” suggesting international acquisitions are not out of the question.

Companies have all sorts of reasons for seeking nonorganic expansion, but slower earnings growth is often a motivator. In the case of China Resources Beer, revenue for the January-June period shrank 2% on the year, to 15.2 billion yuan. Total beer sales volume fell 1.9%, to 6.12 million kiloliters, due to a combination of the economic slowdown, weaker consumer spending and bad weather.

The company managed a 45% increase in net profit attributable to shareholders, on a continuing operations basis. But the amount — 606 million yuan — put its net profit margin at only 4%.

Even as it looks to make a splash in the M&A market, China Resources Beer is carefully watching its yuan. Vincent Tse Tan-hon, its investor relations director, said the company “is not spending more [on marketing] than previous ‘sports years,'” even though events like the Rio Olympics and the UEFA Euro 2016 soccer tournament are ideal for raising a brand’s profile.

The July and August heat may have put beer sales back on a growth trajectory, in the “low-single digits,” but Tse made it clear that management is “not spending excessively.” It apparently wants to keep the books in order, should the opportunity for a big outlay arise.

The earnings announcement was made during lunchtime. At the end of trading in Hong Kong on Friday, China Resources Beer’s stock was slightly up 0.25%, at HK$15.68.