Demanding closure of 11 liquor shops allegedly opened against the wishes of locals, Swaraj Abhiyan today stepped up attack on Delhi government saying it will hold a public hearing against one such outlet in the constituency of Culture Minister Kapil Mishra. 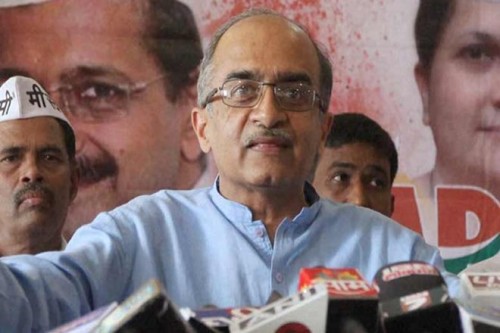 Hitting back, Mishra said Swaraj Abhiyan, founded by expelled AAP leaders Prashant Bhushan and Yogendra Yadav, was “copying” him as he has already planned a Mohalla Sabha on the issue on August 28 and this is an “act of desperation”.

Addressing a news conference today, Bhushan released a list of 11 outlets and demanded their immediate closure, failing which, he said, Swaraj Abhiyan will launch a city-wide campaign.

He also questioned the Delhi government why it has decided to suspend the opening of liquor vends only for a year and if it will it resume opening outlets after one year when the MCD and Punjab elections are over.

“In case the Delhi government does not heed to the genuine demands of people, a state-wide campaign will be launched to expose the duplicity of Aam Aadmi Party and build public pressure to act,” Bhushan said.

He also announced a public hearing (Jan Sunwai) on August 23 at a liquor vend in Khajoori in Karawal Nagar which, he said, has become a nuisance for the general public.

Anupam, media in-charge of Swaraj Abhiyan, said “Since the Mohalla Sabhas do not seem to be getting a legislative authority in near future, will the government close down these shops immediately?”

He also accused the AAP government of showing no interest in passing the Swaraj Bill.

“Why is the government trying to mislead by saying that Mohalla Sabhas will have the power to remove liquor vends, when the fact remains that no such power has yet been granted?
“The recent exercise, newspaper advertisements and announcements regarding Mohalla Sabhas are nothing more than political rhetoric meant for media consumption. The superficial exercise, with no substantive legislative step of forming Mohalla Sabhas is being used as a cadre building exercise for upcoming MCD elections,” Anupam said.

No new liquor shop except in malls, will come up in Delhi in the current financial year and the mohalla sabhas will be empowered to shut existing neighbourhood vends if there are complaints of “nuisance”, the excise policy, approved by the Chief Minister Arvind Kejriwal had announced last week.

“Why has Chief Minister Arvind Kejriwal’s announcement of not opening any new liquor shops been made only for one year? Does Kejriwal want to resume his anti-people liquor policy after the MCD elections in Delhi and Assembly elections in Punjab?” Bhushan said.

Earlier, Abhiyan had alleged that 58 wine shops have opened up in Delhi ever since the AAP government came to power and had demanded closure of shops where people were opposing them.