Tourism-oriented Thua Thien – Hue Province in central Vietnam still relies heavily on beer products for its budget, the provincial council’s economic and budget committee said in its report on Tuesday. 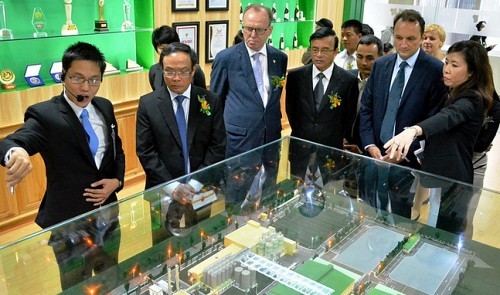 The People’s Council of Thua Thien – Hue Province on Tuesday commenced its second regular session to review the implementation of its five-year plan of the 2010-2015 period.

During the meeting, provincial Committee Chairman Nguyen Van Cao asserted that the province’s economic growth of 9.1 percent, though lower than the expected rate of 13 percent, was reasonable and steady.

The size of Thua Thien – Hue’s economy has increased by 1.54 times since 2010, according to a report presented at the meeting by the Economic and Budget Committee of the provincial People’s Council.

The province’s economy, however, is still the humblest among the five provinces and cities of the key economic region of central Vietnam, which are Thua Thien – Hue, Da Nang, Quang Nam, Quang Ngai, and Binh Dinh.

The lag was attributed to lack of new and quality tourist products, while the province’s industry still relies mainly on a limited range of products such as beer, cement, electricity, and textile.

Thus, the report said, despite the number of tourists to the province having witnessed a steep yearly increase of 16.7 percent on average, from 25 to 30 percent of the provincial budget (VND5,010 billion, or US$223.66 million, as of 2015) was still coming from beer products.

Meanwhile, its regular budget expenditures have been on the increase due to a number of newly introduced policies and schemes from the central government, in addition to uneconomical and ineffective spending on science and technology, investment promotions, and production development models.

Thua Thien – Hue Province is still ranked fifth out of five provinces and cities in the key economic region of central Vietnam in terms of investment capital, the report pointed out.