Who’s in pole position to buy a stake in Vietnam’s biggest brewer?

AB InBev and SABMiller, Heineken, Asahi, Kirin, ThaiBev and Singha Asia have all registered to bid for stakes in state-owned Sabeco, maker of Saigon Beer and 333. With a price tag of at least $1.8 billion and a government facing a ballooning budget deficit, interested parties don’t need to beat down the door.

“The government wants to sell its stake as soon as possible,” Sabeco CEO Le Hong Xanh told Bloomberg News. “All we care about is who will pay the most.”

Vietnam has real attractions for brewers, whose revenue tends to be linked to the size and wealth of a country’s key beer-drinking demographic, its working-age population.

The Southeast Asian nation was one of the world’s 10 fastest-growing economies in 2015, and its demographic statistics are even more attractive. By 2030, it’s likely to add about five million people between the ages of 15 and 64, giving it a bigger working-age population than Japan:

Japan is the player to watch in this contest. Most brewers based in rich countries with stagnant local demographics have worked hard in recent decades to give themselves global reach, but Japan’s local heroes have fallen behind. Asahi makes 86 percent of its revenue at home, followed by Sapporo at 82 percent and Kirin at 65 percent. 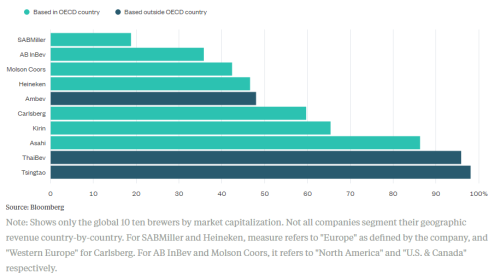 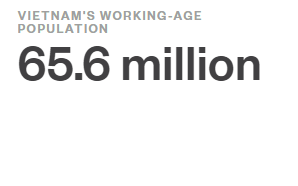 It’s Asahi that most needs a deal of this sort. Kirin has already struck alliances with Tsingtao and the Philippines’ San Miguel in Asia, and it owns Brazil’s second-biggest brewer, the former Schincariol. Asahi’s biggest deal to date, an acquisition of AB InBev’s Peroni and Grolsch brands in Europe, makes much less sense.

Vietnam’s government doesn’t look to be asking an excessive amount for its 90 percent stake, either. Sabeco has a 40 percent share of the local market, but the $1.8 billion value the state has put on the business is only 11 times forecast 2016 net income of 3.76 trillion dong ($169 million). That’s a steal relative to the median 40 times net income multiple in 17 brewery deals worldwide over the past five years.

Analysts expect Asahi to generate 214 billion yen ($2.1 billion) of free cash flow by the end of 2018, so it certainly has the money to make an acquisition. Its problem is slow top-line growth: After seeing revenue climb 27 percent in the four years through 2015, forecasts show a 4.1 percent increase in the same period to 2019.

Vietnam is still something of a frontier market, and Asahi’s overseas forays haven’t always ended happily. But in this instance it shouldn’t be put off by the substantial lineup of interested players. There may be a crush at the bar, but Asahi is a company badly in need of refreshment.