The Kerala State Beverages Corporation (Bevco) saw a steep increase of around 16 per cent in its liquor sales during the Onam season as compared to last year. 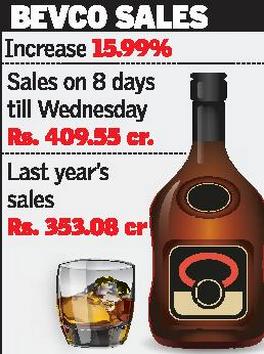 The sales registered an increase of 15.99 per cent over the last year’s sale of Rs.353.08 crore during the period, according to official statistics.

On Uthradom day (Tuesday), Bevco registered sales of Rs.58.01 crore, a significant increase from Rs. 52.89 crore on the corresponding day during the previous year. Although the final tally is yet to be ascertained, initial estimates show the sales on Wednesday to be Rs.38.86 crore, a marginal increase when compared Rs.38.18 crore earned by Bevco on Thiruvonam day of 2015.

The total sales during this month till September 14 stood at roughly Rs.571 crore.

The upward trend in liquor sales is despite the number of retail outlets of the Bevco being brought down to 270 from 305 over the last one year.

Bevco managing director H. Venkatesh told The Hindu that the increase could be attributed to the rise in the number of self-service premium liquor outlets numbering around 25, among other factors. He, however, refused to comment on whether the ban imposed on serving liquor in hotels, except five-star establishments, has had any effect on the sales through Bevco outlets.

While the statistics may not reflect the exact level of liquor consumption in the State, it appears to be a better approximation of the scenario post the curbs on liquor sale.

With the implementation of the restrictions, the high volume of ‘seconds’ liquor (for which excise duty is not paid) is also supposed to have come down.