The images of Obama eating bun cha and drinking Habeco beer in Hanoi appeared on all local newspapers in May, when Vietnamese attention was drawn to the President’s official visit to Vietnam.

Analysts then predicted that the move by the most powerful man in the world would help Habeco beer sell like hotcakes. But the company has unexpectedly reported decreased revenue in the first six months of the year. 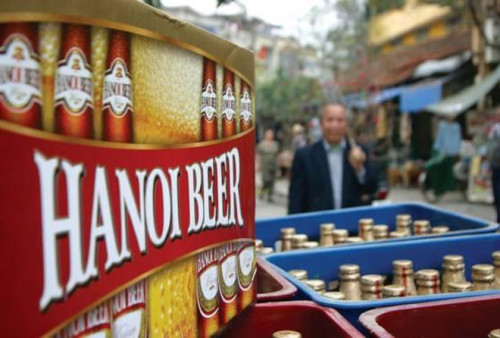 The audited financial report showed that revenue from sales and services in the first half of the year was VND4.049 trillion, a decrease of VND610 billion, or 13 percent, compared with the same period last year.

In the first six months of the year, it spent VND110 billion on ads and promotion campaigns, an increase of VND32.6 billion, or 42 percent, compared with the same period of last year. The spending was the main reason behind Habeco’s higher sales cost, about VND464 billion.

Financial experts, after analyzing Habeco’s financial report, have pointed out a problem that even though Habeco’s has big amounts of cash, it still had to borrow money from banks.

The company’s total debts reached VND1.24 trillion by the end of the first half of the year, accounting for 53.5 percent of stockholder equity.

With the loans, Habeco had to pay VND37 billion in interest in the first half of the year.

The State Audit has released a decision forcing Habeco to pay tax arrears of VND920 billion in luxury tax.

Habeco has sent a petition to the Ministry of Industry and Trade, saying that the decision is unreasonable.

After Obama had dinner at Huong Lien bun cha Shop and drank Bia Ha Noi on May 23, the first day of his visit to Vietnam, both brands appeared many times on mass media. Bia Ha Noi was even mentioned in Obama’s speech the next morning.